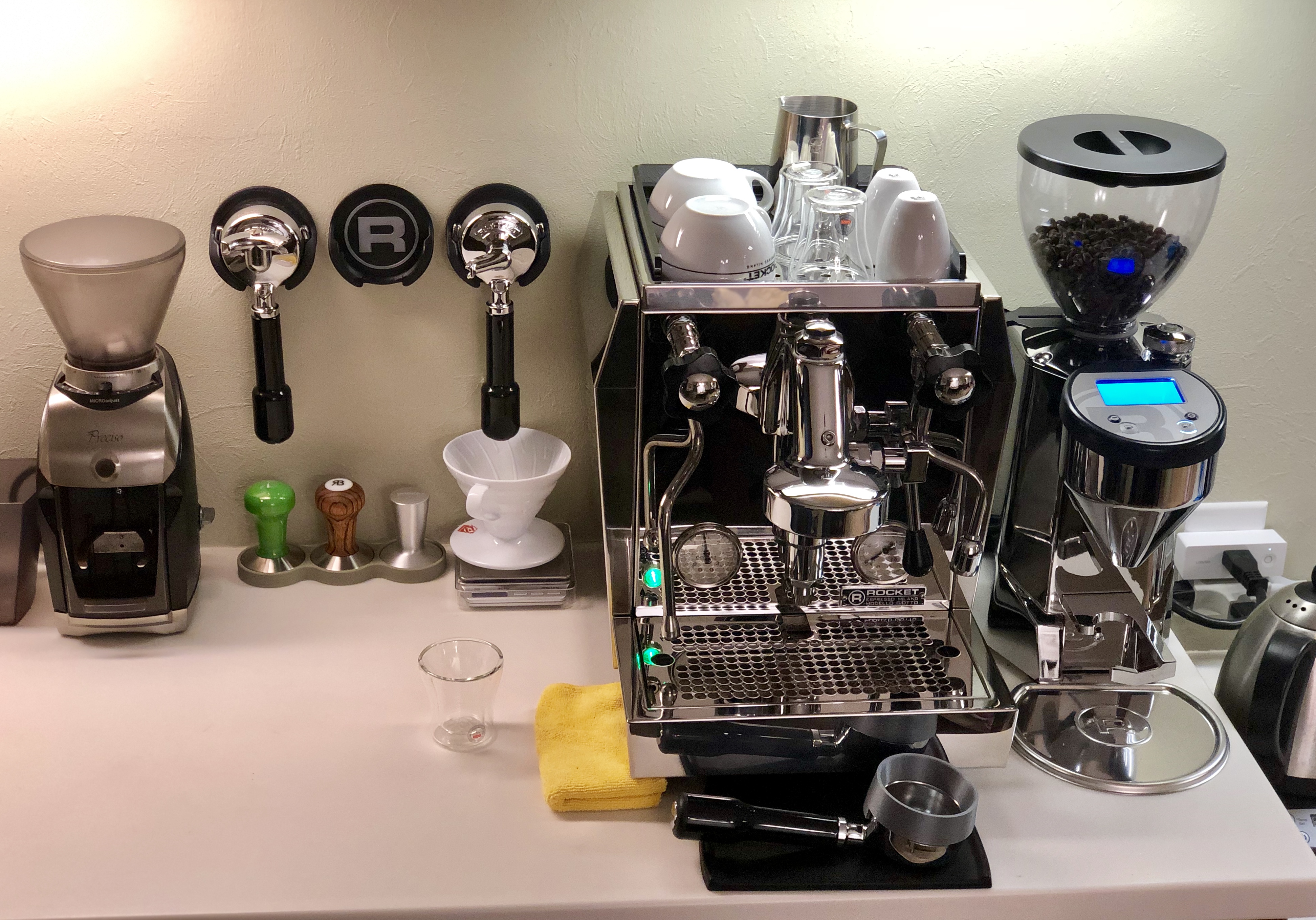 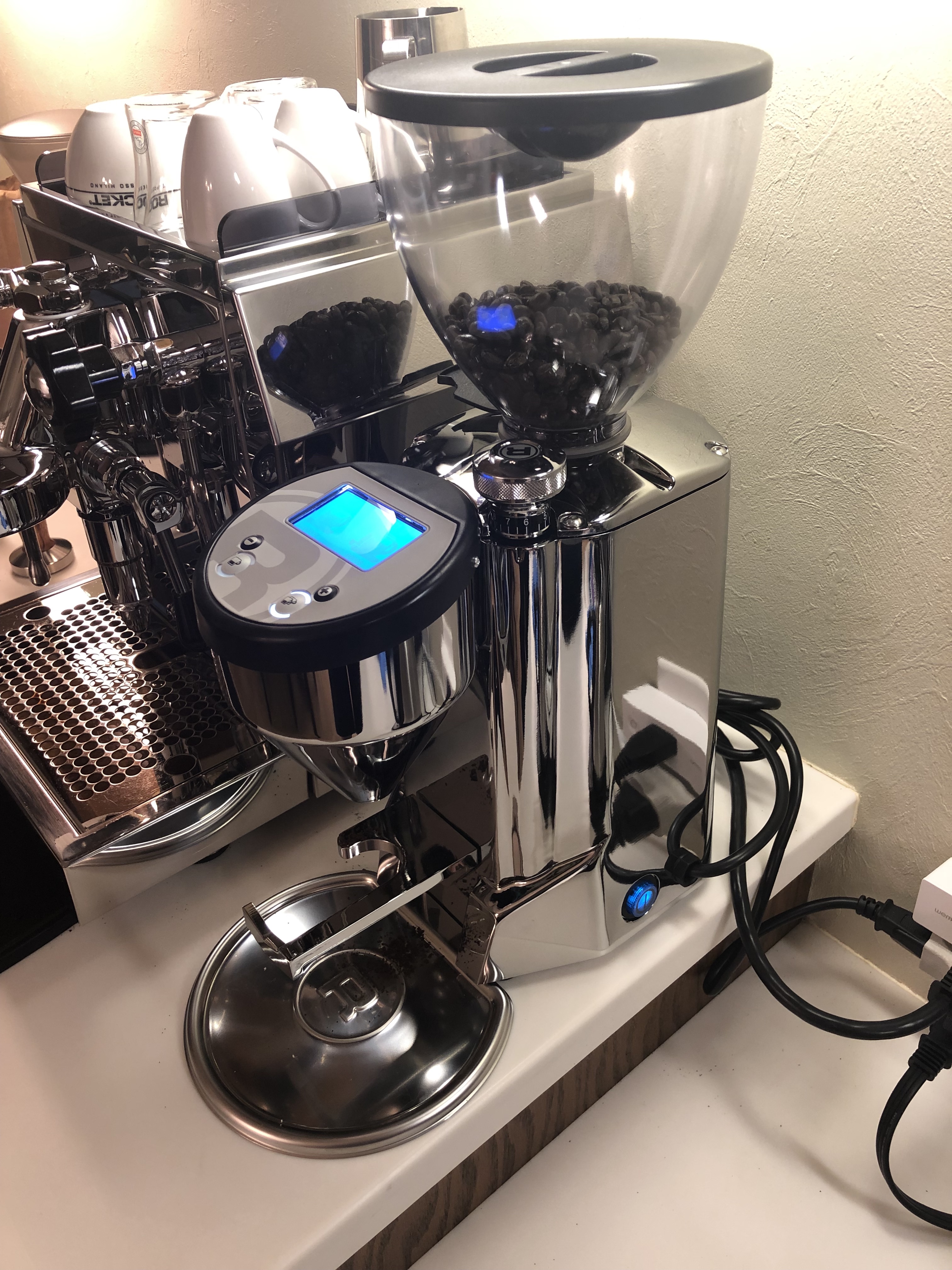 So I have been using the Rocket Fausto since last March. Prior to receiving, I was asking several questions online since it was still relatively new to the market. A bunch of people replied “its made by Atom”, or “just buy an Atom….” but did not have much else to say. I had been searching for a grinder upgrade for a few years, wanting and wishing for several different brands and models. I had played with and experienced much nicer grinders but was stuck with one that was not ideal for my home espresso setup.

My experiences with my old grinder that I had used somewhat happily for years left me looking for a few things that drove me crazy since the beginning.

So I knew a better grinder would lead to a more consistent grind and better shot, but I had 3 key things that were driving me crazy on a daily basis. Time to read more online reviews, but the reviews for the Fausto weren’t there.

I spoke with Joe at Espresso Outlet prior to purchasing.  Wanted to see if there was anything else that might fit me.   I ended up buying it here!   https://www.espressooutlet.net/rocket-espresso-mac...

The Rocket Fausto arrived in a box with “Fragile” printed huge on the side, pronounced Fra-Gee-Lay…. Must be Italian! If you don't get the reference, watch the movie A Christmas Story this holiday season. Very fitting, the Fausto is definitely Italian! 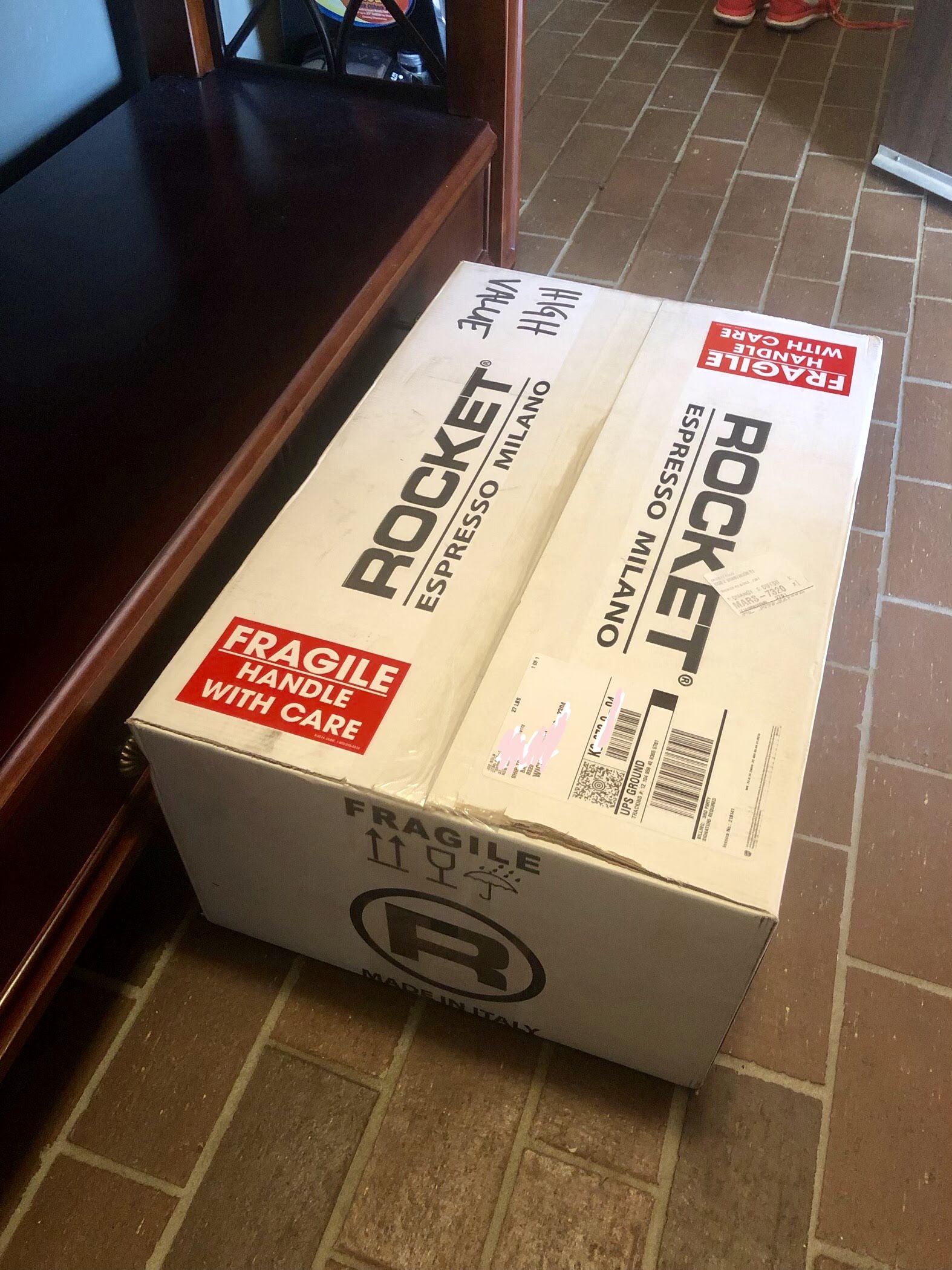 After much anticipation as well as uncertainty, I finally had this new personal grinder, it was finally here after years of waiting! I pulled out my pocket knife after getting home from work and sliced through the tape. It's simple, a shiny grinder nestled in the formed styrofoam. 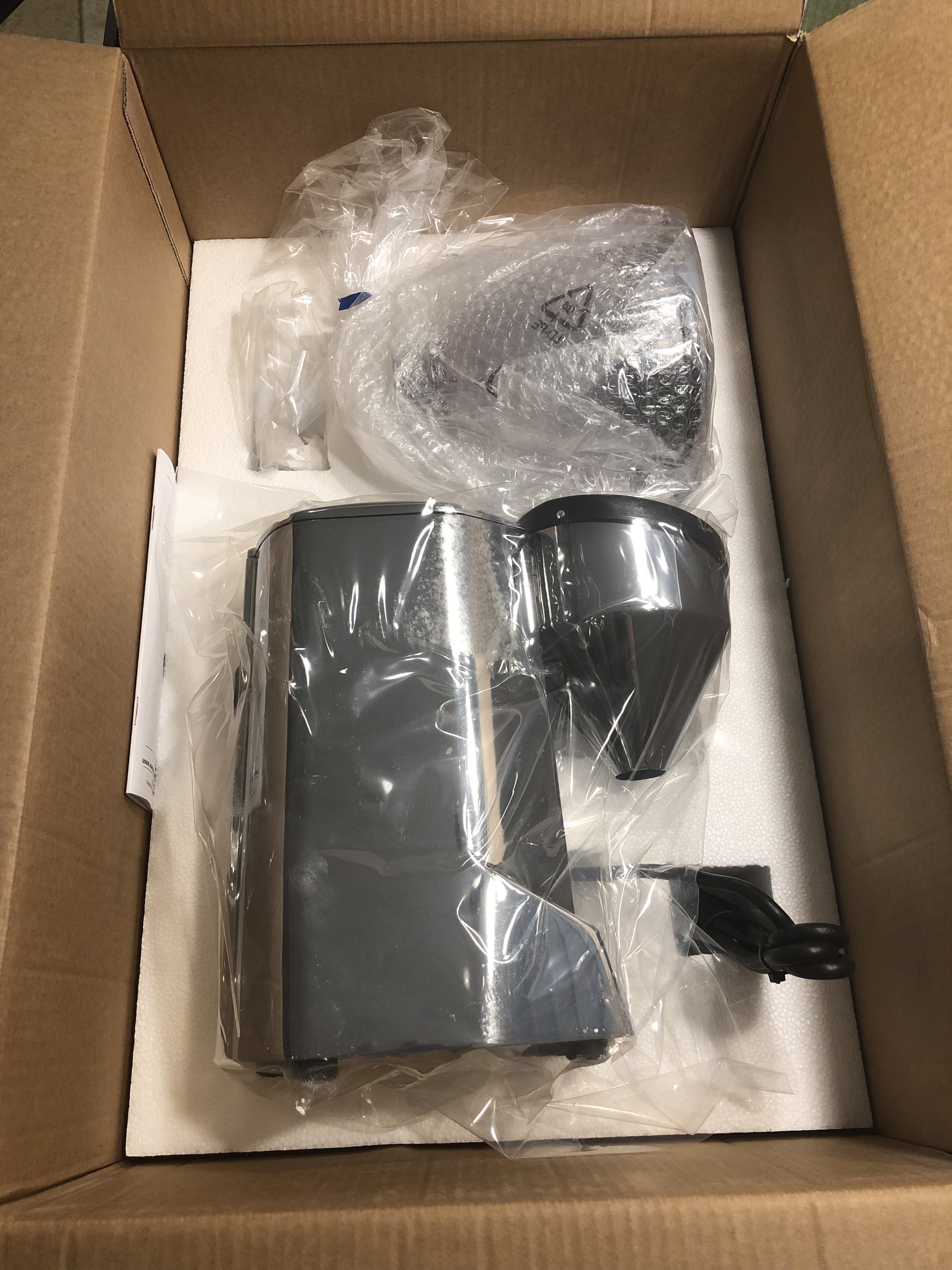 So that being said, the packaging is simple but effective. I mean getting a high dollar grinder from point A to B should be sufficient enough to protect the investment, and in my case the packaging was great.

Setting it up, I was immediately happy with a few things even before plugging it in. The case is polished cast aluminum, but unlike the flimsy plastic housing I was used to, this thing was a beast! It weighs about 25 pounds. The hopper is a descent size, nothing huge like in a commercial setting, but more than ample for my needs. (The hopper holds approx. 1.5 pounds of beans)

The next surprise to me, the very limited photos out there had a cradle/portafilter holder that was a cheap piece of bent stainless steel. The cradle that they ship with now is an amazing cast machined piece of aluminum that fits a variety of portafilter brands that I tried. It is adjustable (up/down) by about 1/2” if required. The only one that does not fit is the Brevile 54mm portafilter (smaller 3-tab) as the holder interferes with the spouts. Probably not a big issue for most since most people don't have $1000 grinder with a $300 espresso machine. 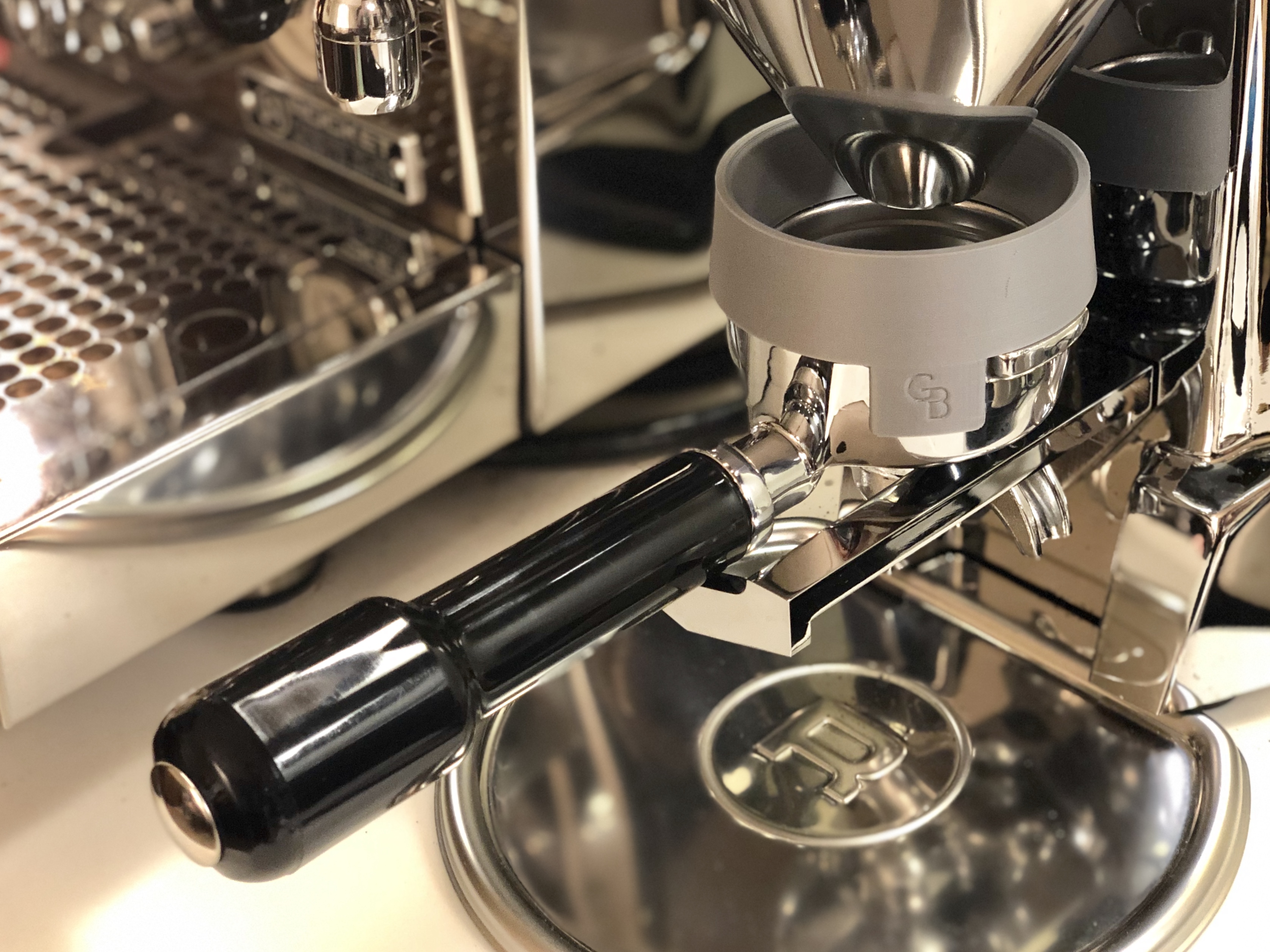 I finally plugging the Rocket Fausto into the outlet, I hit the blue power button on the right side and it came to life. The simple screen shows two options, a single and double dose as well as a shot counter and shot timer above each dose option. A simple display, but what else do you need? The two dose options are totally arbitrary and programmable. Simply select the dose button and use the +/- buttons to change the grind time. You could easily use both options for a double shot of varying times if you so desired, or you could easily do a double shot and a triple shot dose as well. 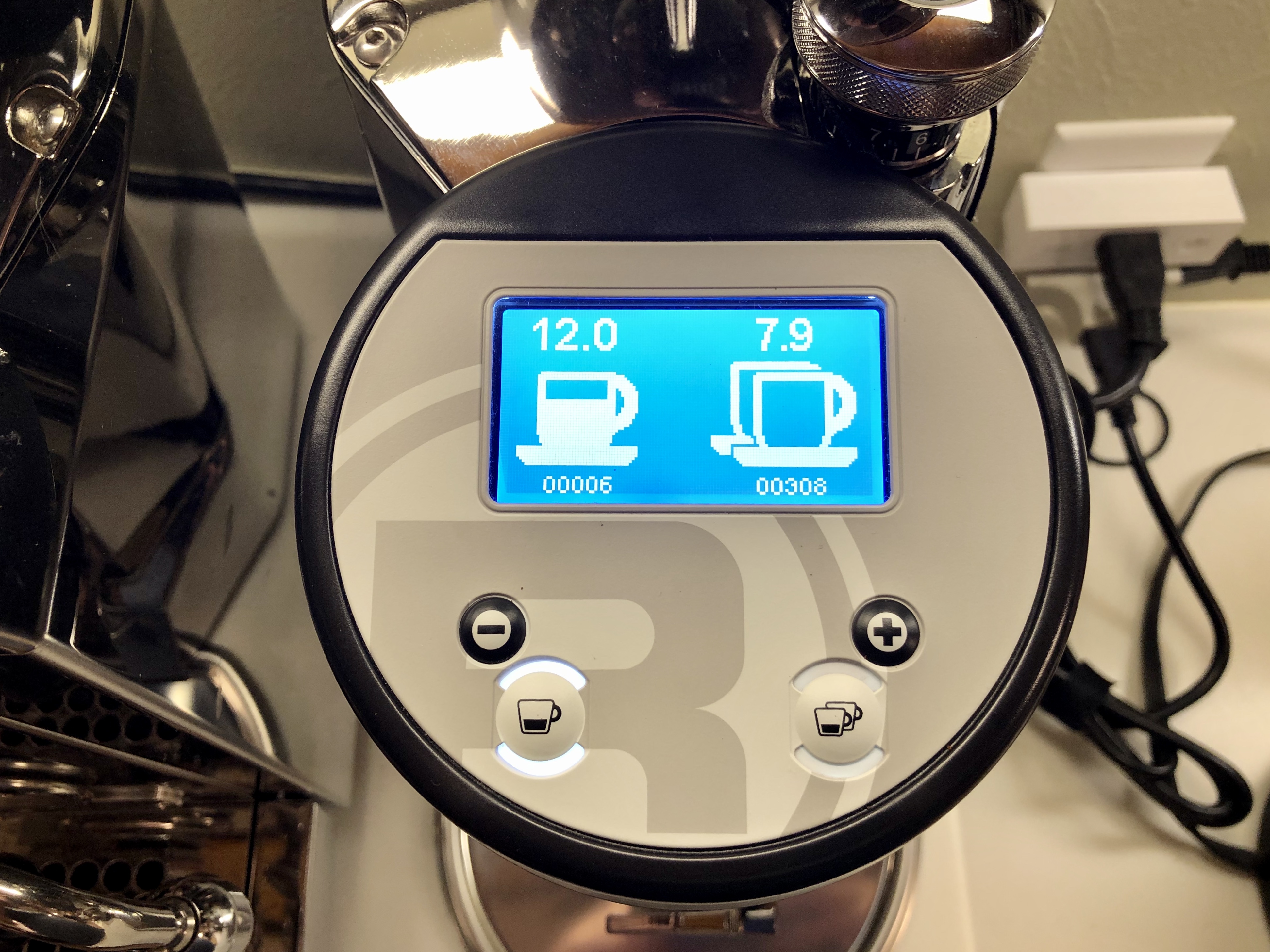 The adjustment dial, the next huge win. A knob at the top of the grinder next to the hopper. It looks amazing, feels solid, knurled, and has the Rocket logo in the center. The dial has plenty of resistance to keep it in place, no walking around or click adjustments like I was used to on my previous home grinder. A real step-less adjustment that wants to hold zero! One of my seemingly more superficial desires seemed to be met. The other nice part about the adjustment knob is that when removing the burrs, it will hold zero (for the most part) if you disassemble for cleaning. Older styles, such as the Mazzer, the adjustment ring is a collar around the hopper neck that holds the burrs in place. To remove the burrs meant unscrewing the adjustment ring. Not here! 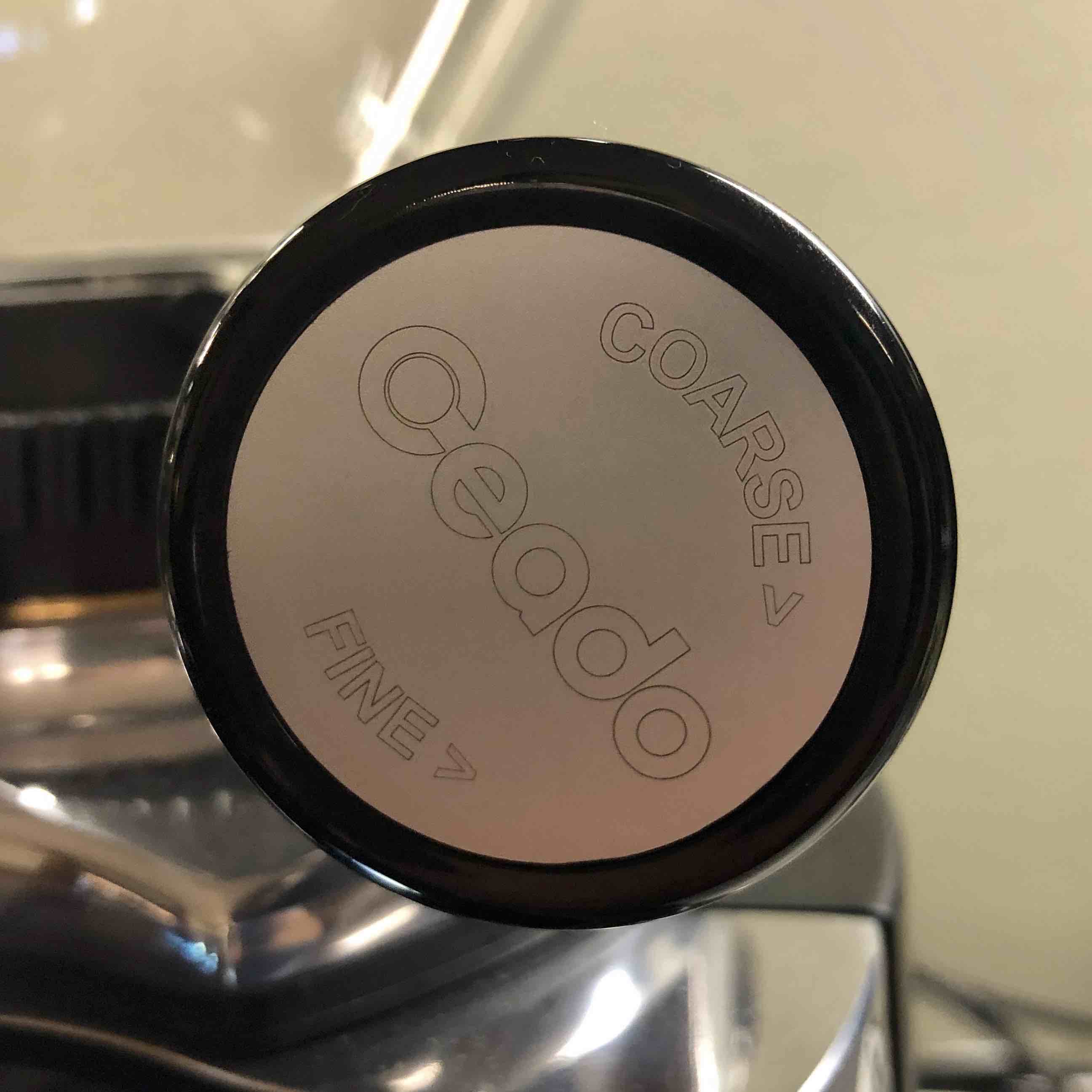 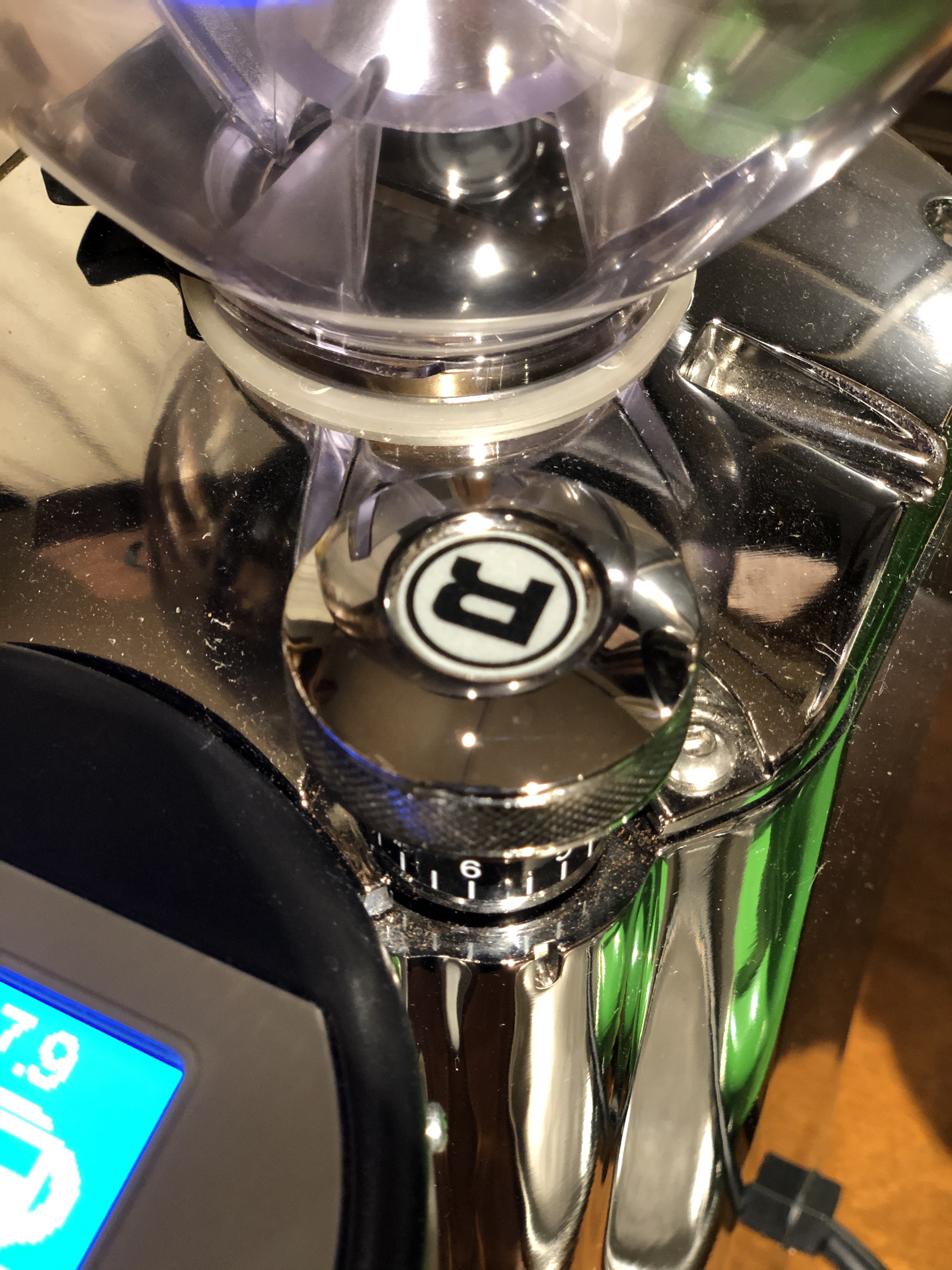 So all this, but how does the coffee taste? Spend upwards of over $1000, so what are all the wins if the coffee doesn’t taste better? In anticipation of receiving the grinder I made sure to have several pounds of beans on hand to play with. Shot #1, while not dialed in was quite impressive. Changing from my broken down inconsistent grinder to what I had been dreaming of, even at its worst, was better. No joke. I knew what good looked and tasted like, and knew I wasn’t getting it with what I had. After at least 5-6 shots, going too fine and too course I found what was good enough for the evening and was so excited. 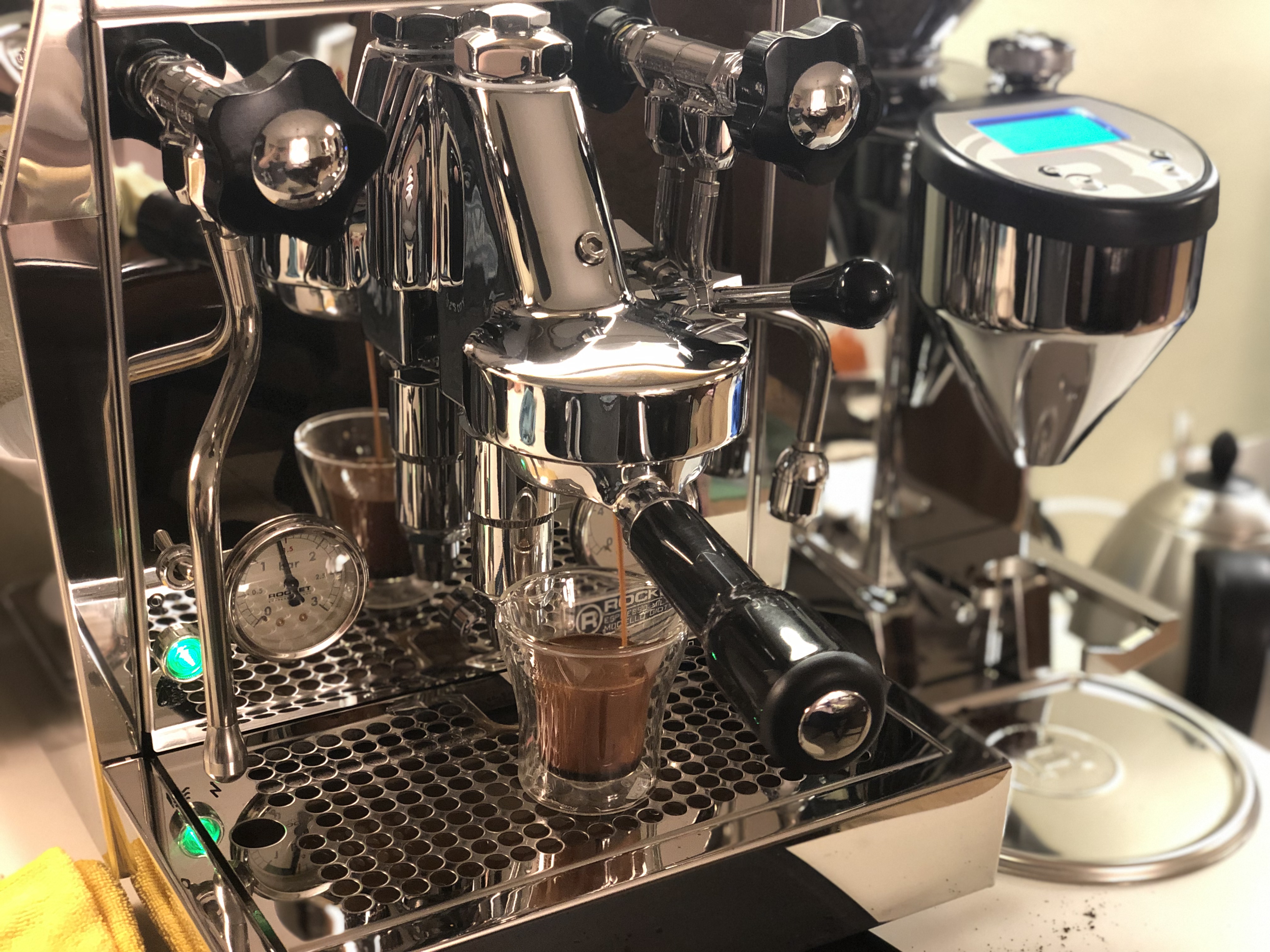 The weekend finally came, time for a bunch of experimentation. I am an engineer by trade, and always love to experiment. For people making a big grinder upgrade, my recommendation to you is to buy 2-3 pounds of the same good quality beans, and expect to pour out a ton of seemingly good coffee. It might be expensive, but it is a sunk cost to learning. Its time to learn your new grinder! In my case I ground as fine as I could, to match the weight/time/shot profile that I was expecting, a beautiful mottled crema that I had yet to experience on my home equipment. Win! 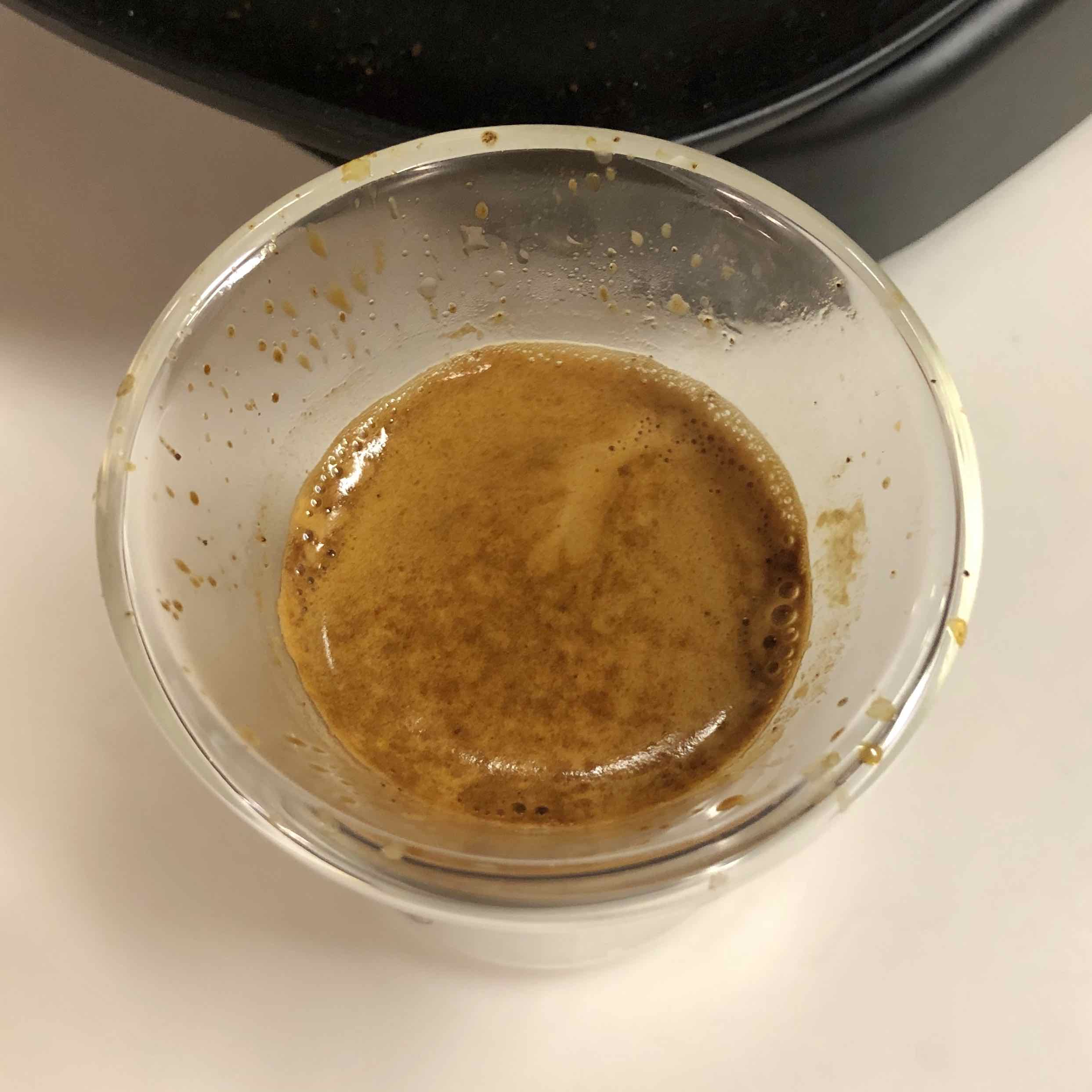 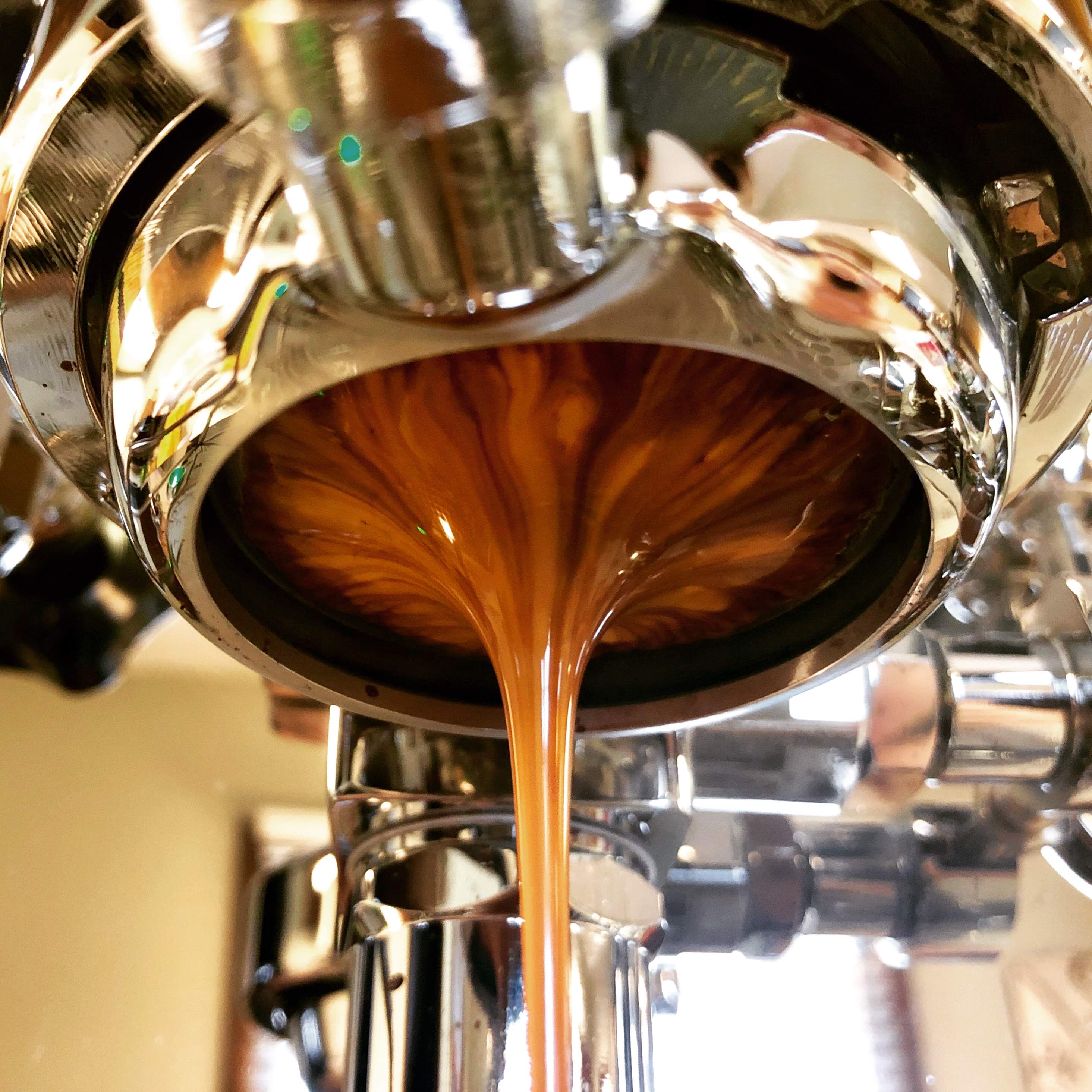 The grind quality was superb! Brand new burrs can clump a little bit, and the air was dry. The clumps were so minor that shaking the portafilter or bowl around dispersed and broke the clumps. As the burrs have worn in, I only notice very small clumps (if any) when the air is very dry. I experience the same on other grinders as well, so to me, not a big deal. 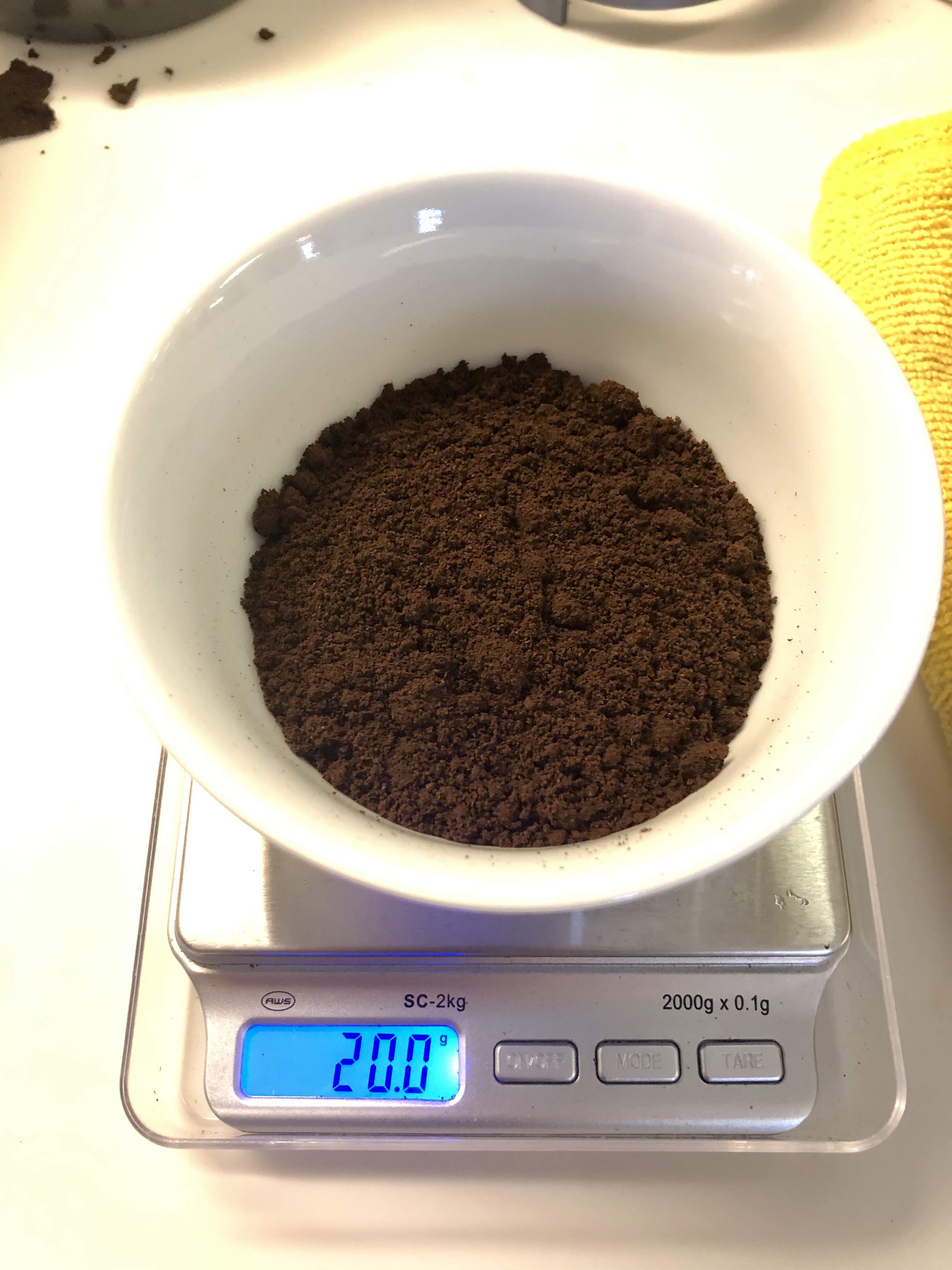 Dialing down the adjustment setting almost as fine as it can go will grind much smaller than most people will ever be able to do anything with. Maybe not quite a Turkish grind, but close.

For me, it grinds at a near perfect speed. Much faster and you will suffer grind quality and create more heat. Much slower and it would feel slow. A typical double shot takes about 6-9 seconds to grind.

The Rocket Fausto is made by Eureka, so it utilizes the same Burrs.  A definite plus! 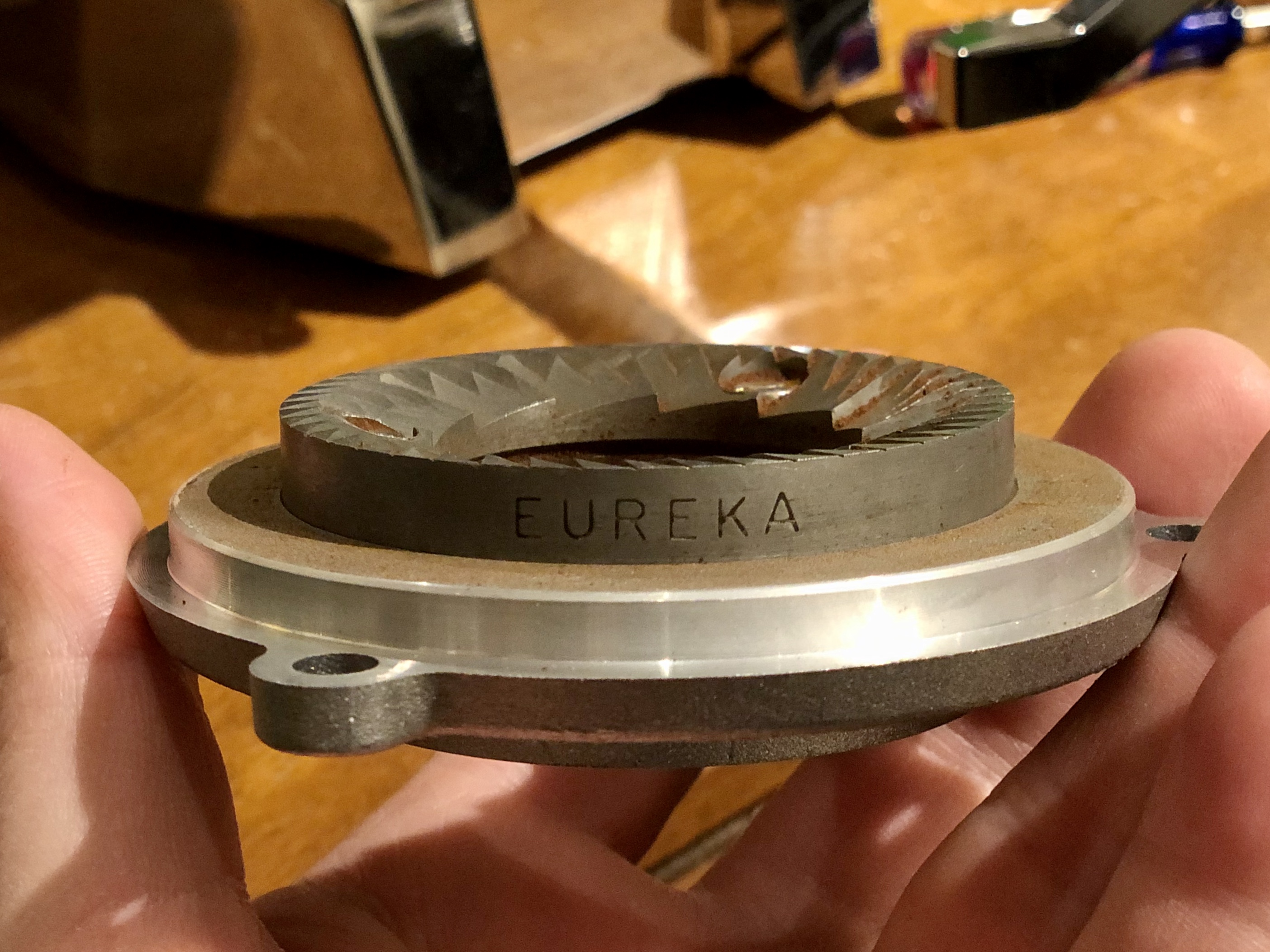 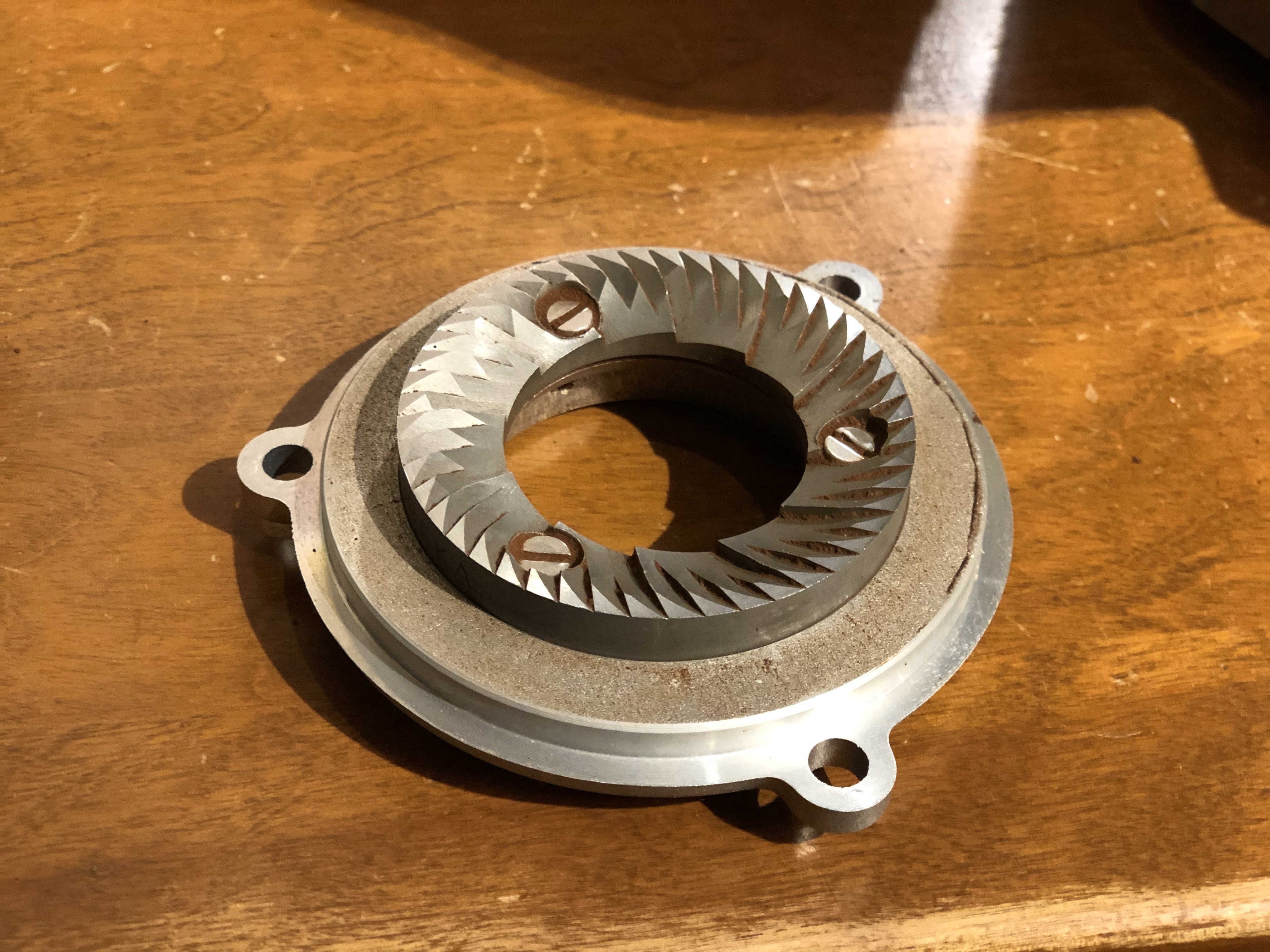 A few misc features about the grinder, if you start grinding and wish to stop, simply hit the same dose button (single or double dose that you selected prior) and the grinder will stop. If you wish to continue the dose, simply select the same button. A few people originally mentioned that you were “stuck” if you stopped mid grind. Not true, once stopped mid grind, press and hold the dose button until it clears the timer. Good to start the next shot.

Playing with some grinders that have been on the market for quite some time, such as the Mazzer Super Jolly, I was used to having access to the “chute” portion of the grinder. If it is a doser model, there is a lid, if its electronic dosing the lid to the chute lifts off. On the Rocket Fausto, it is screwed down. This was not ideal to me as I want to be able to clean out the chute from time to time. While the electronic screen cover is removable via (2) screws, there is another deflector shield that protects the electronics (2 more screws) it's kind of a pain if you plan to open a lot to clean, although I don't think you should do this more than probably once a year if at all. 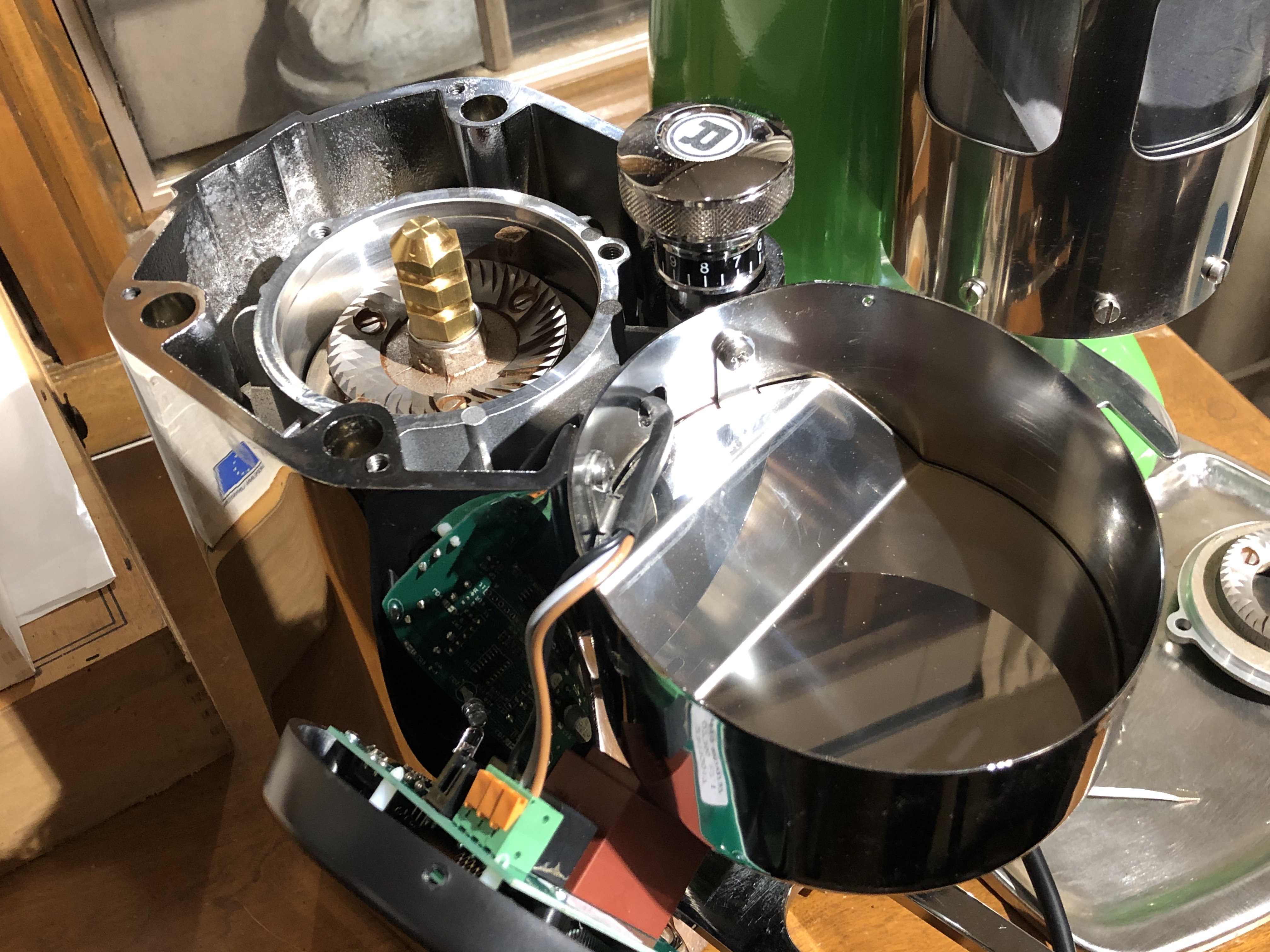 The Rocket Fausto does retain some grounds, but the ground retention isn't the worst.  It has an anti-static and clump buster screen as seen below.  It works quite well.  This type of electronic dosing grinder will just retain some grounds in the neck between the burrs and the funnel no matter what.  For me, the static and clumps seem low enough that the retention is still very minimal.   If this is a huge issue for you, you could probably run the grinder for 1 second, discard, and then grind your dose. 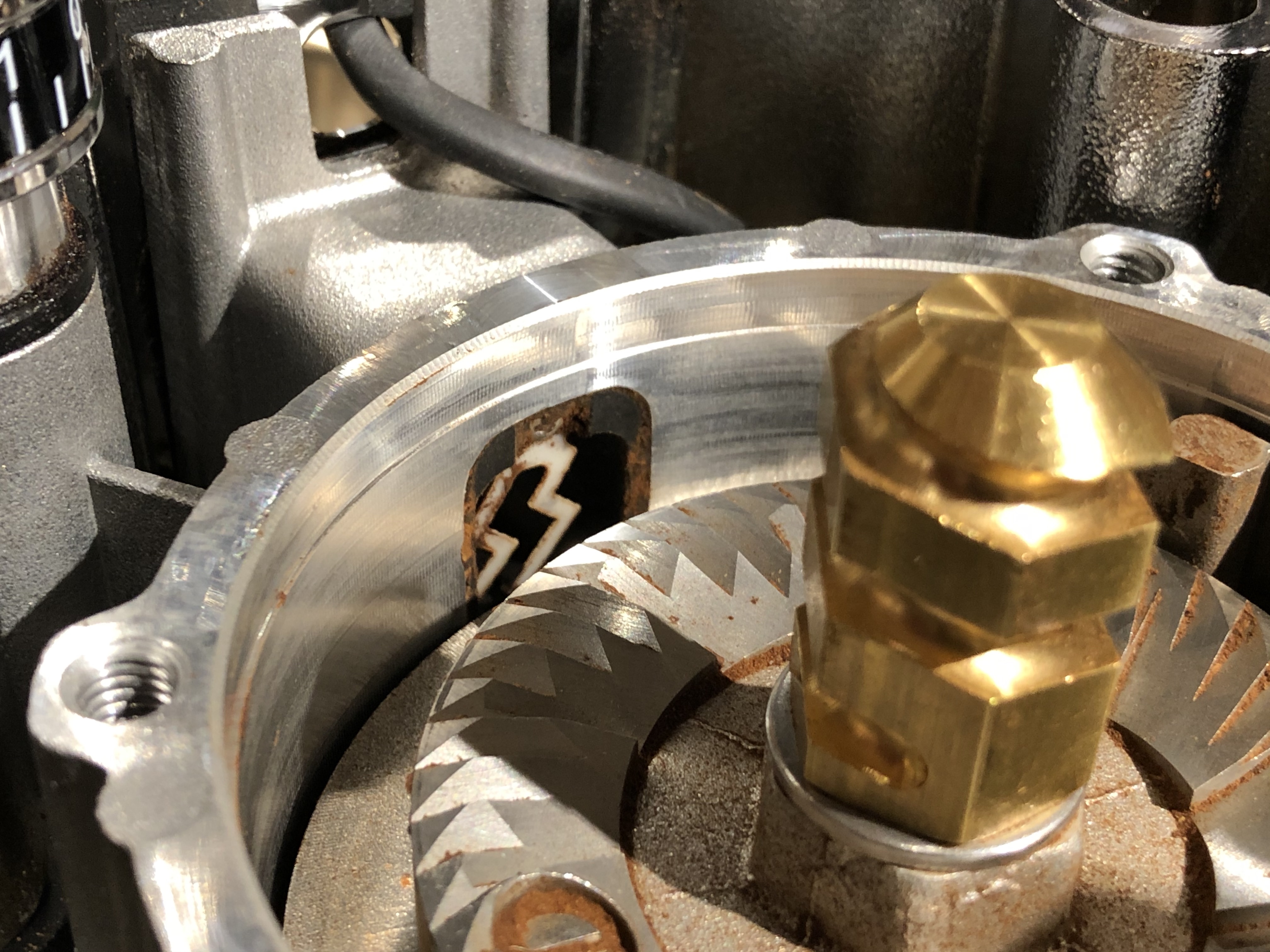 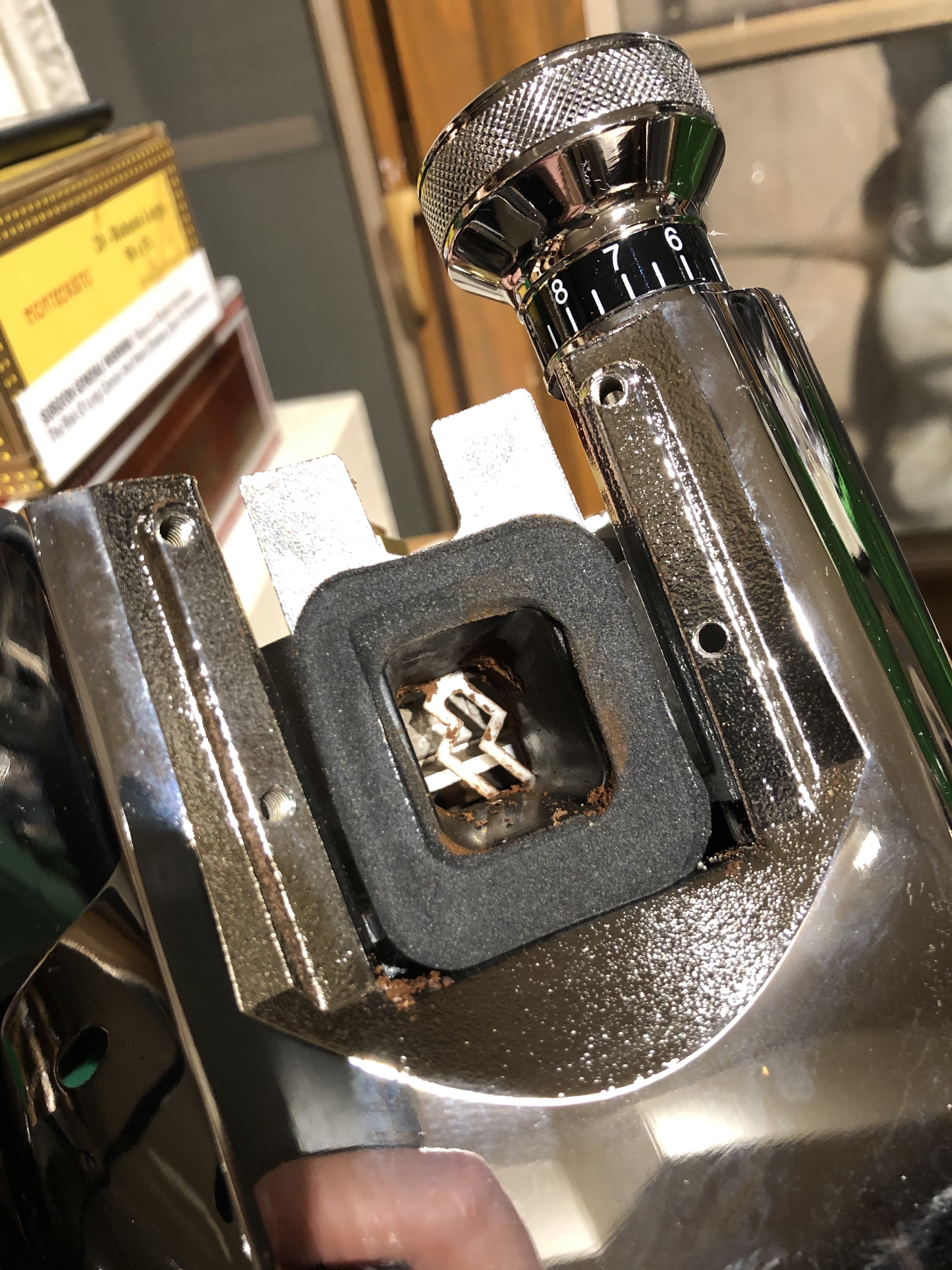 The ascetics of the Rocket Fausto, WOW this thing is very shiny. It is polished aluminum from top to bottom with a stainless steel tray (note they make a power coated black version as well). If you own any of the polished espresso machines, namely Rocket, this thing looks just amazing next to it. Rocket might have gone a bit overboard on the “R” branding, but yet, just looking at the grinder, personally it doesn’t seem overboard. That being said, the electronic control panel, adjustment knob, the rear badge, and the ground tray all contain the Rocket brand. To me, I am proud of the brand, so display proudly! Long story short, this grinder will look stunning next to any machine. 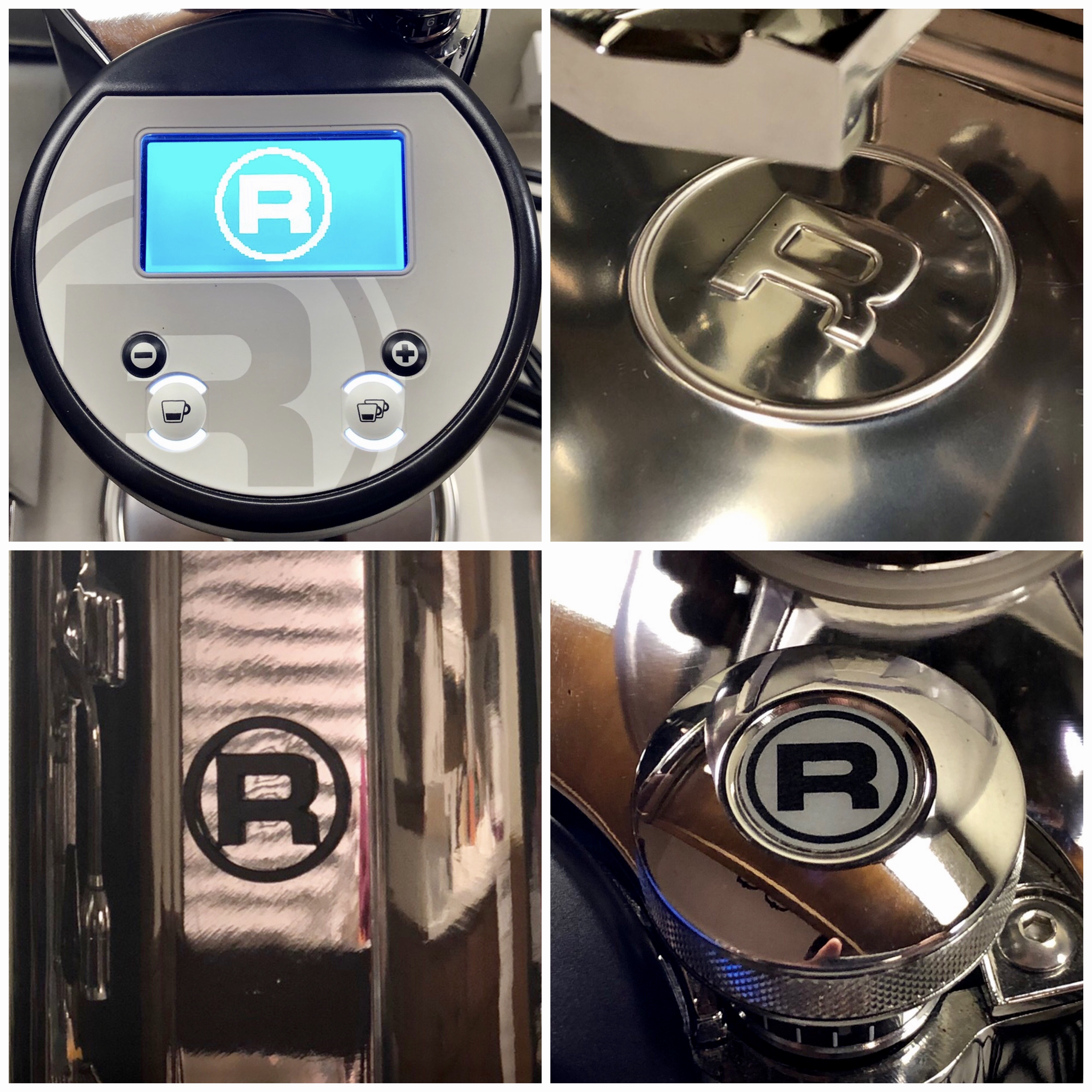 A few misc specs. The Rocket Fausto used 65mm flat burrs. That is extremely comparable to most grinders in this class, an excellent diameter flat burr.

My take on using this grinder for almost a year (and comparing to similar grinders) no regrets at all. From an ascetic standpoint it matches the rocket near perfectly and will look great alongside any espresso machine. My only complaint is that my Rocket Giotto PID has a green light, and the Fausto has a blue light. Big deal? I don't notice really. It keeps grinding so consistently and cleanly. The ground retention is not very bad for this style of grinder. I went from a single dose to using the dose timer, and will never turn back. It stays relatively clean, but not very easy to clean when the time comes. To do a deep clean, you will need an Allen key and Phillips head screwdriver to remove the top of the grinder (extremely easy) and you can remove the top burr holder, vacuum out, etc. or for a quick cleaning every few months, I throw some “Grindz” beans into the top and it is sparkly clean! A few times I have used my old grinder for espresso, and I had no clue what I was missing out on for several years. 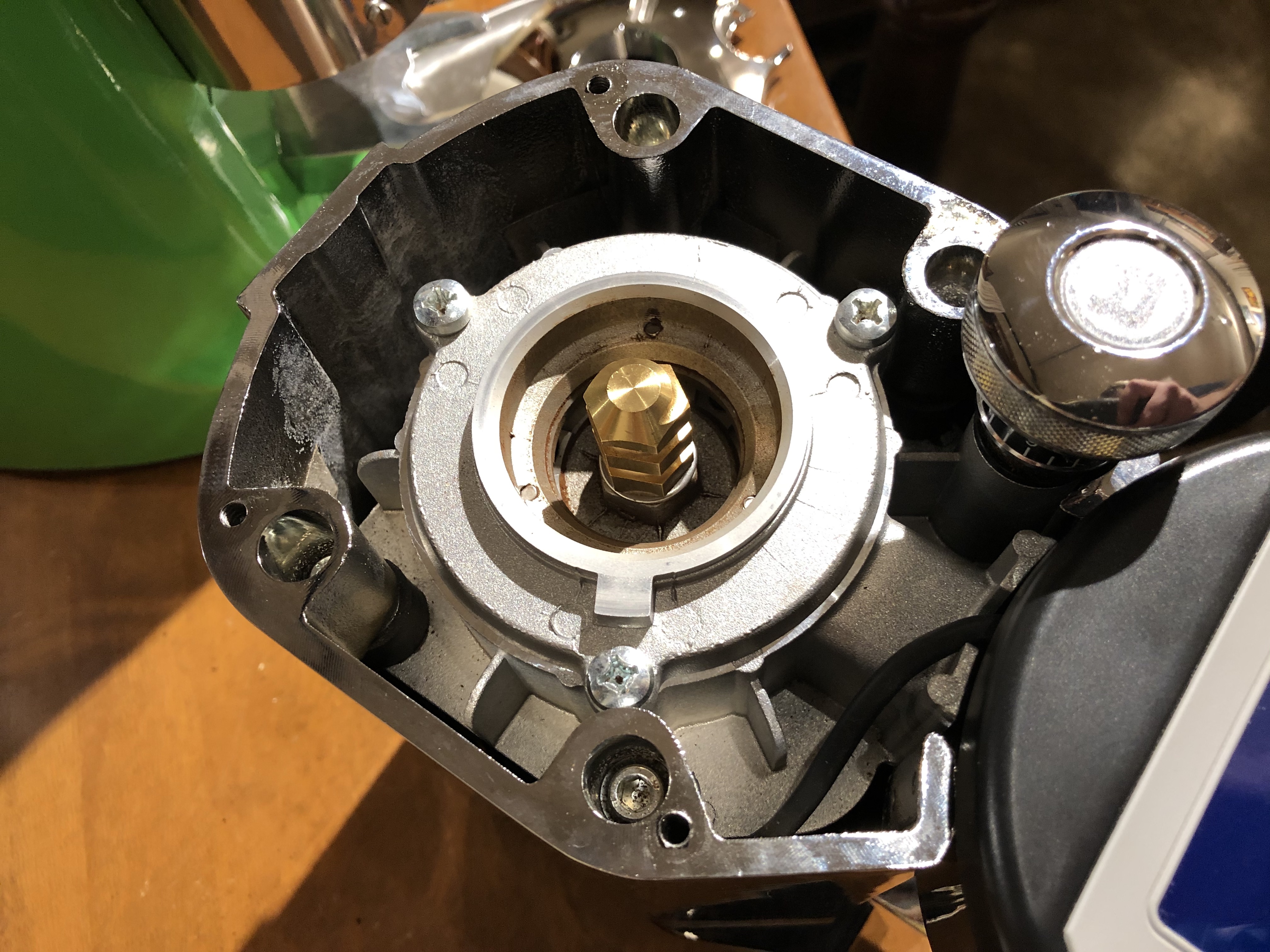 One issue that might be a problem to some people is the overall height of the machine. I originally had my espresso setup near my sink, but the cabinets were much lower in that area of my kitchen. I moved across the kitchen where I had more space above my espresso machine and grinder. With an overall height of 17.5 inches, make sure it fits under your cabinets. This isn’t any surprise, as most of the grinders of this caliber will be taller. This grinder is much shorter than my Mazzer Super Jolly, closer to a Mazzer Mini in height and size. It seems large, but is definitely on the smaller size of the nice grinder market. Unfortunately as far as I have seen, they have not started making a shorter hopper yet.

I bought from Espresso Outlet.   I enjoyed speaking with Joe Kolb prior to my purchase.  So many companies are less personal, this experience was top notch!   If the Rocket Fausto sounds like it is for you, here is the link where I purchased.