The debate, is a high end espresso scale worth it, and how does the Acaia Lunar stack up? 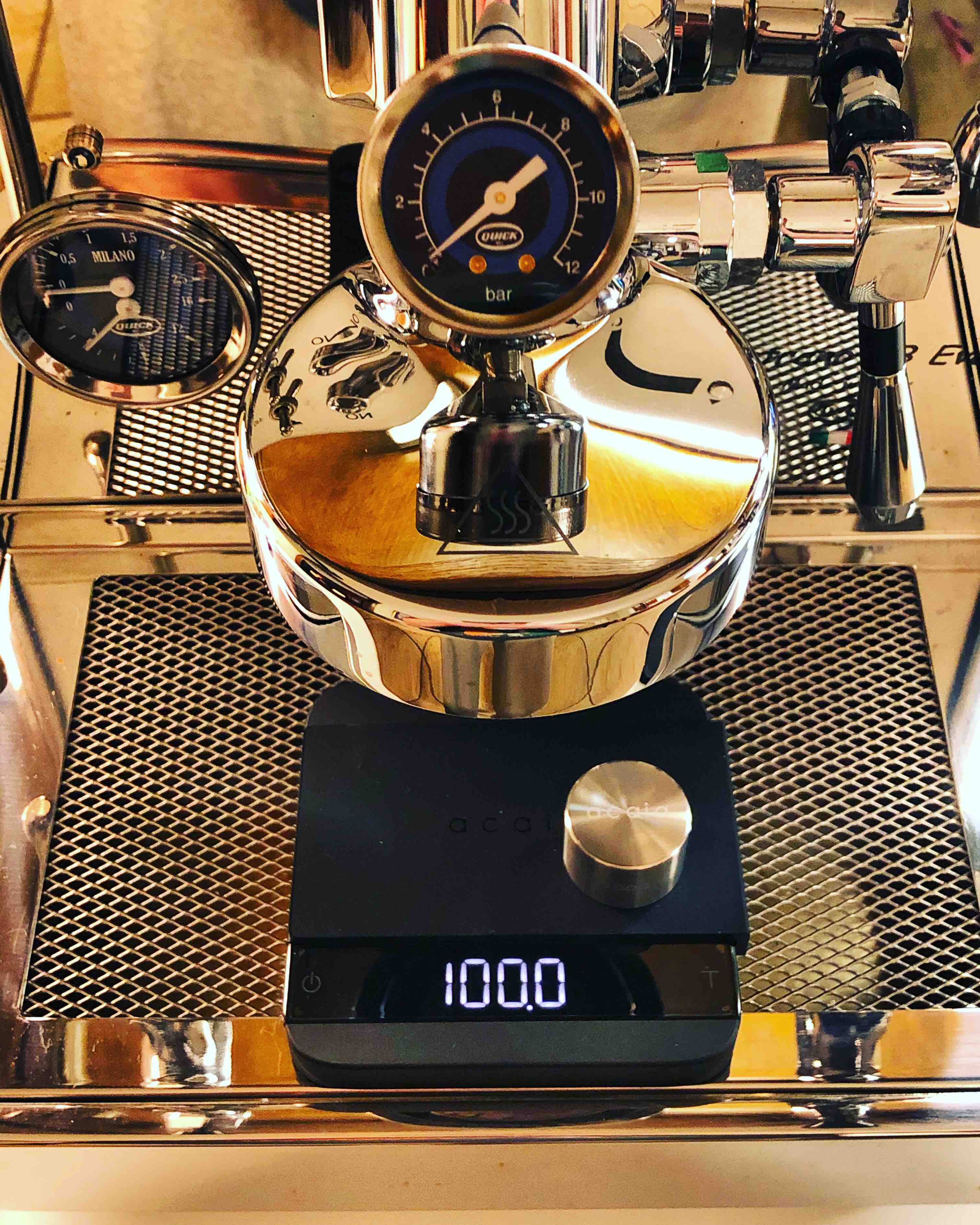 I enjoy reviewing espresso gear, but usually focus on grinders, espresso machines, portafilter baskets, and such.  I have been using my trusty inexpensive "jewelry scale" which I paid about $20 for over 10 years ago.

For anyone just getting into coffee, early on I did not realize how important a scale actually was.  I would usually eyeball my 2 scoops of beans to makeshift single dose my shot.  I thought I was living high at the time but a lot has changed since then as I learned more from articles such as this about the importance of brew ratios.

It doesn't really matter if you are using a French press, pour over, or espresso, getting a consistent ratio of ground beans and water is very important.  There are many other aspect such as water temp, grind size, etc. but many people tend to over look the consistency of their dose. Stop eyeballing and get a scale!  Using a scale is one of the easiest variables within your control.

I used my $20 bargain scale for years.  It worked pretty well for weighing my portafilter before grinding a shot, ensuring I ground 18 grams of coffee into my portafilter.  What else did I really need a scale for?  Myself included, I hear people say things such as "this scale I have is good enough, I don't really need more precision than this".  I also did not fully understand what the Acaia did at the time.

One aspect which I was fully aware of, but I never willing to pay for, was that the Acaia is semi waterproof.  Still, an extra $200 for waterproof?  I just won't use a scale for brewing espresso.  That too was a mistake.  How can we maintain a good brew ratio just eyeballing it?  I took all the time to weigh the input but not the output?

Acaia knows their scales aren't the bargain $20 scale that I know many people use.  So they give you the full experience.  Opening the box the scale is packaged like you just bought a new smart phone or tablet.  Everything is neatly nestled and displayed within the box.  Its a scale, so not much to it. 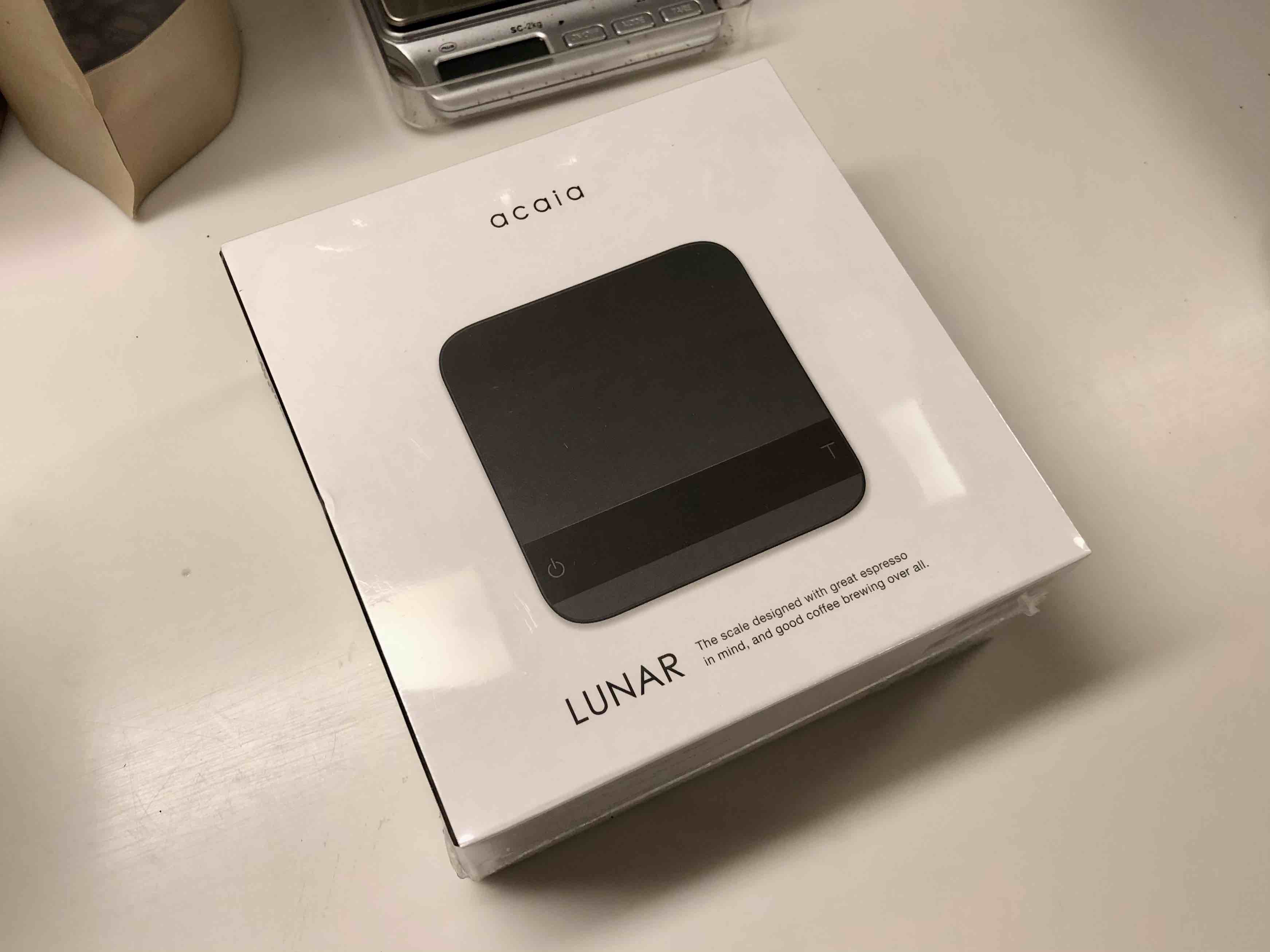 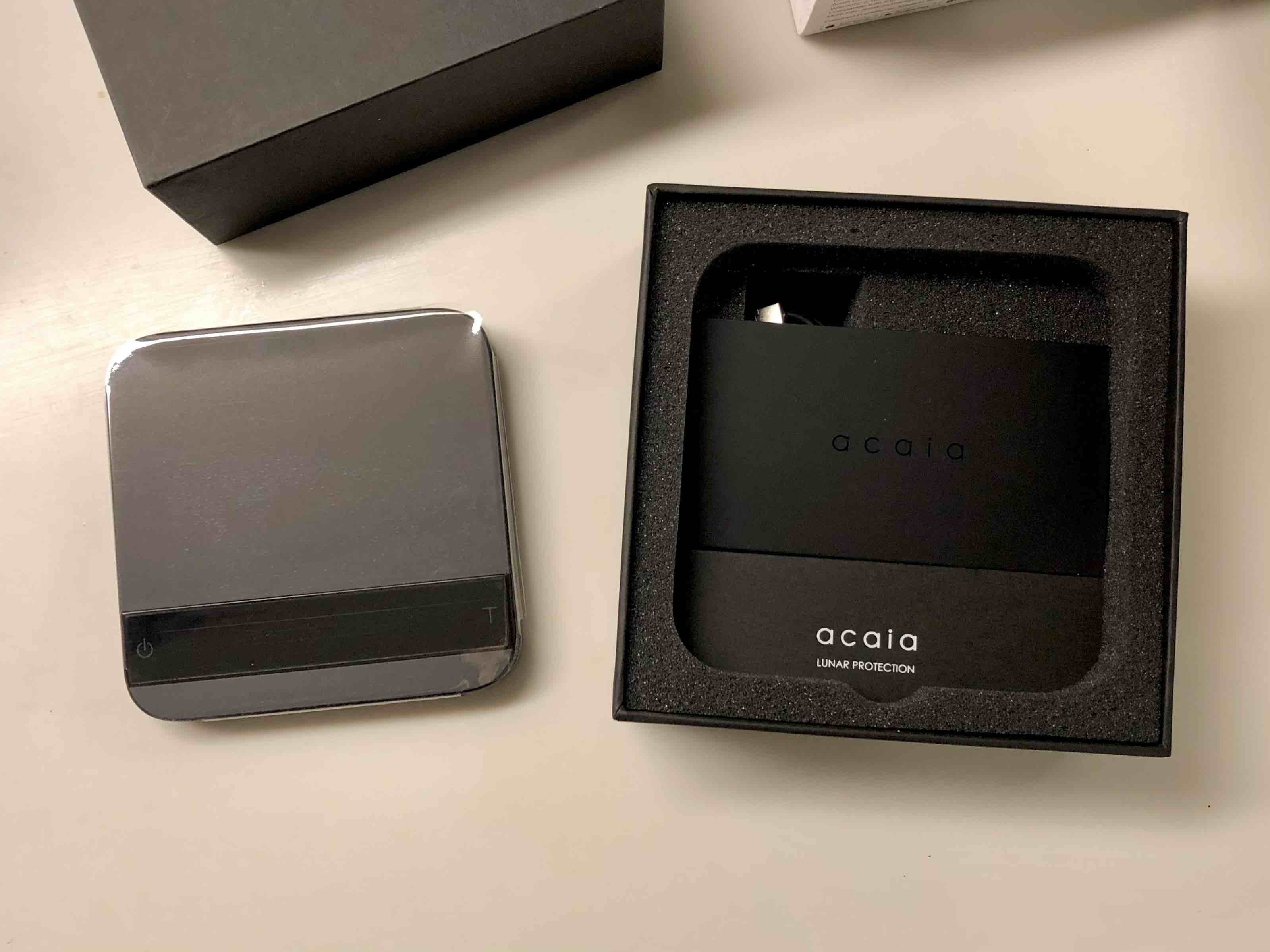 The scale itself is made of quality aluminum and feels very stout. A few other things in the box included a 100g calibration weight, a USB charging cable, and instructions. One thing to note, they do not include a wall adapter to plug the USB cable into. I was not expecting to see one, but just know if you don't have a phone charger or USB port, you might need to pick one up. Id say most of us have a few extras laying around in a drawer. 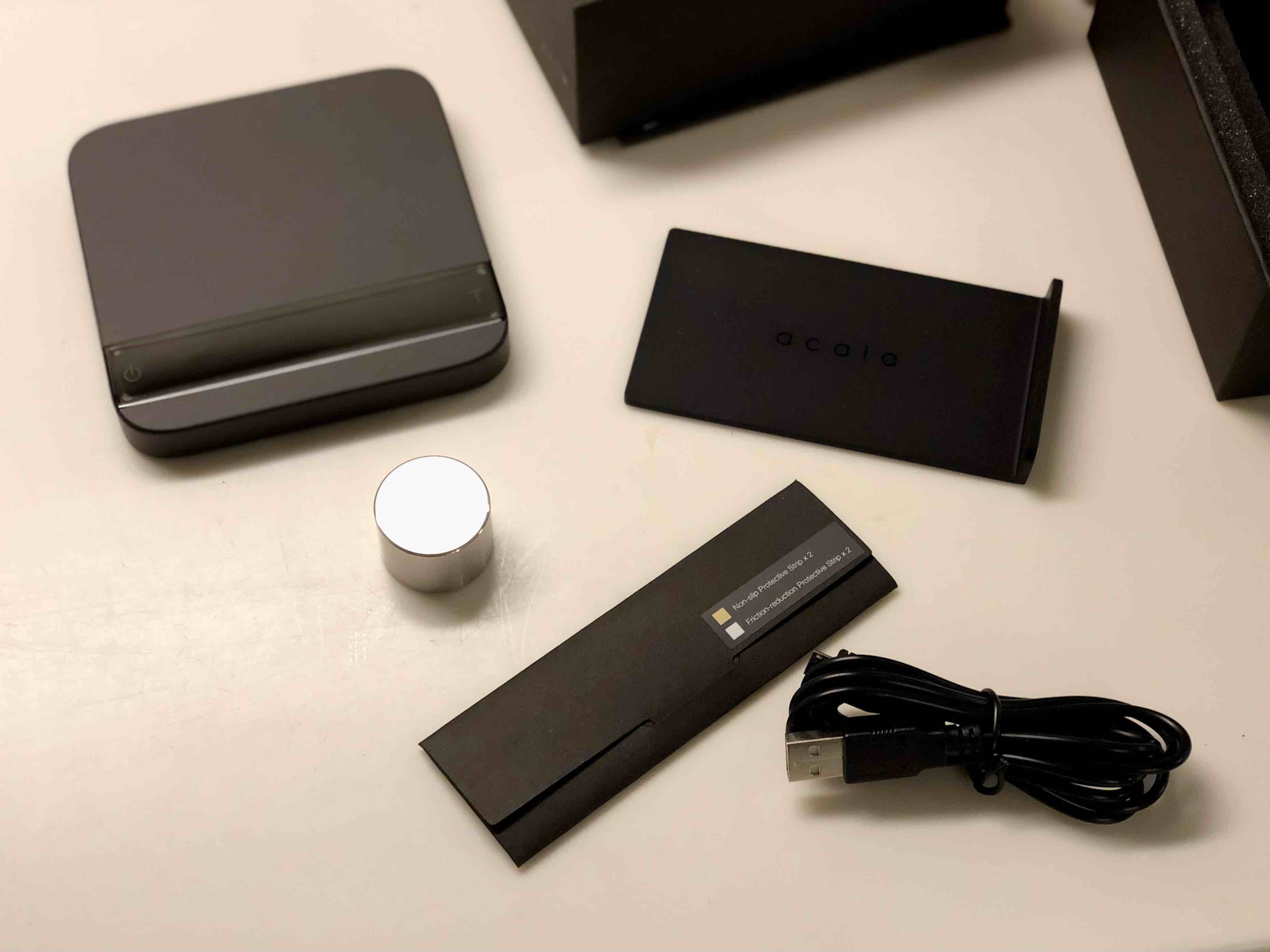 Acaia supplies 2 sets of feet to stick to the bottom of the scale.  They have one set that is to help prevent scuffs on your equipment but also allows it to slide around.  The second set is designed to be more grippy to prevent the scale from sliding around.  I chose the grippy pads as it seemed to suit my needs better. 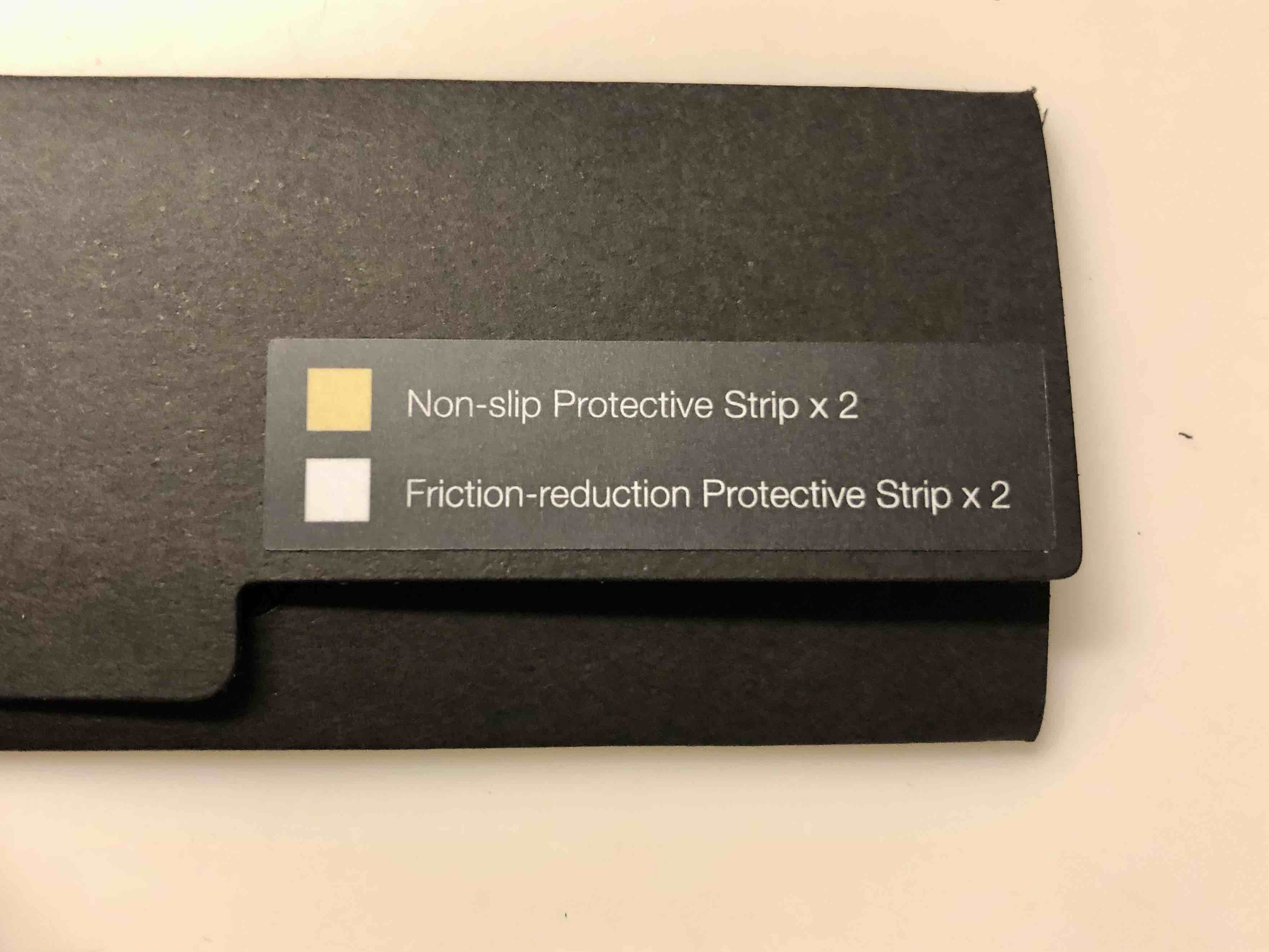 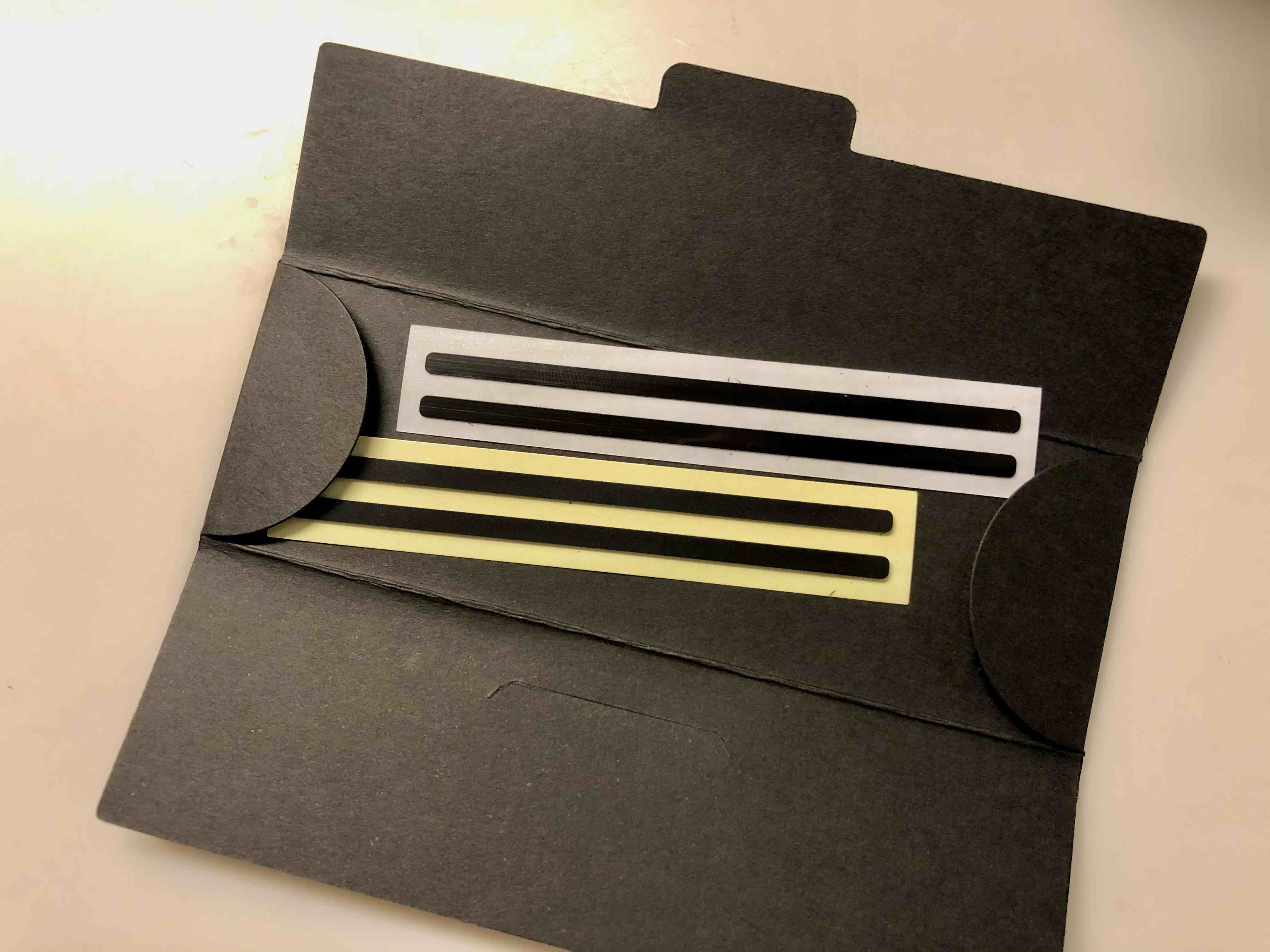 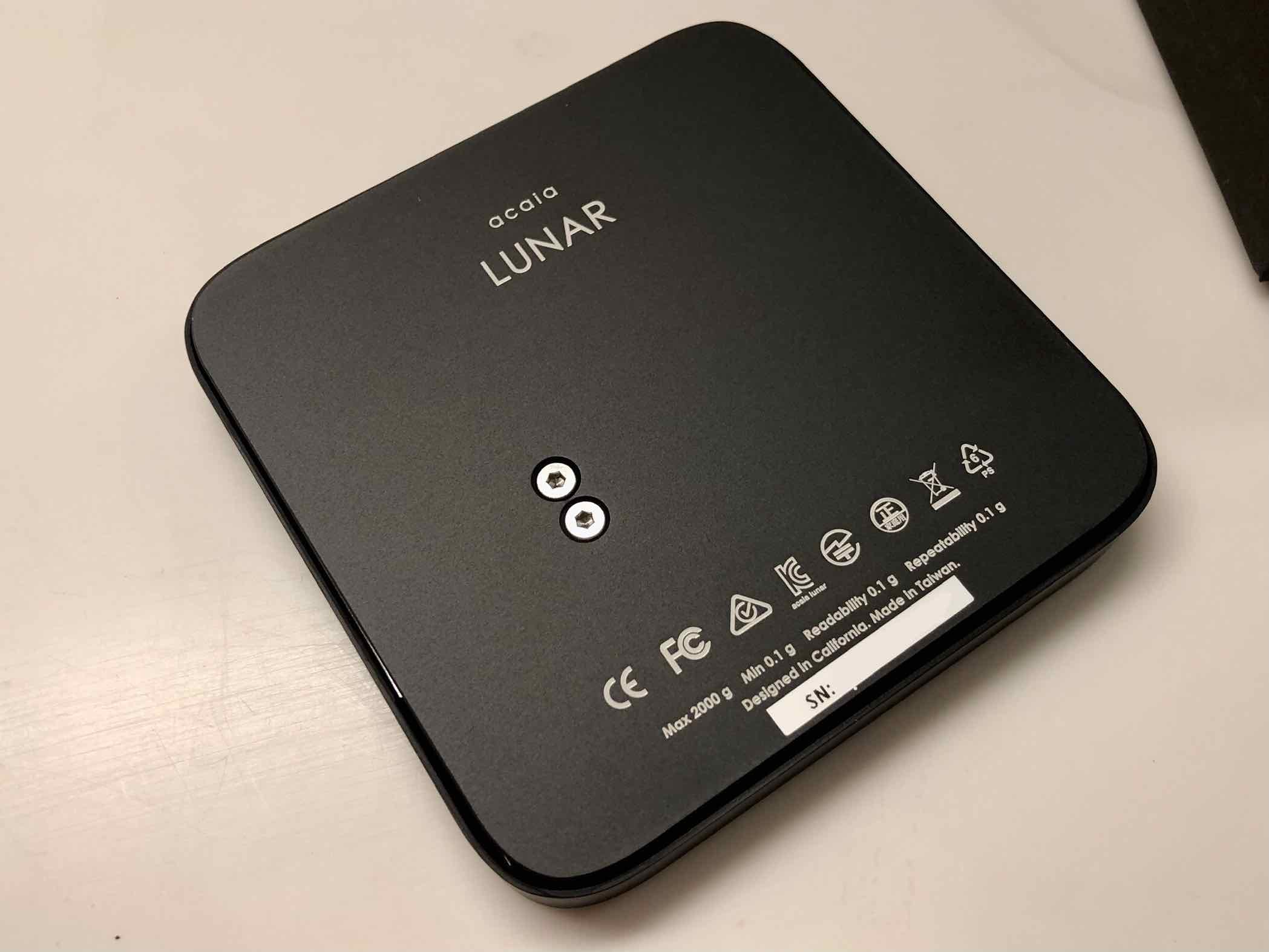 Atop the scale there is an L shaped rubber mat that lays neatly in place and is there to prevent scuffs.  You can flip the mat either direction to assist with propping your portafilter for example. 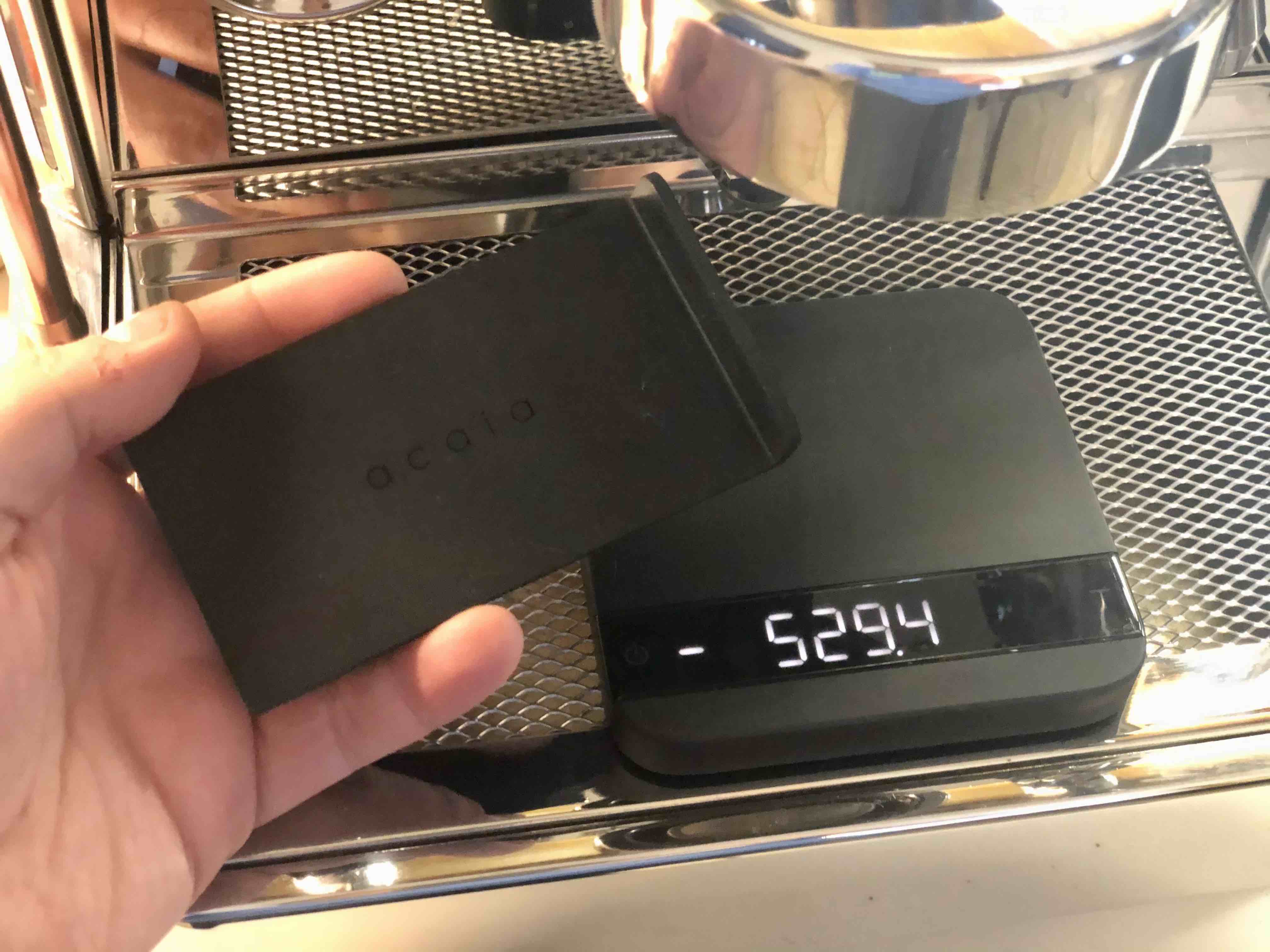 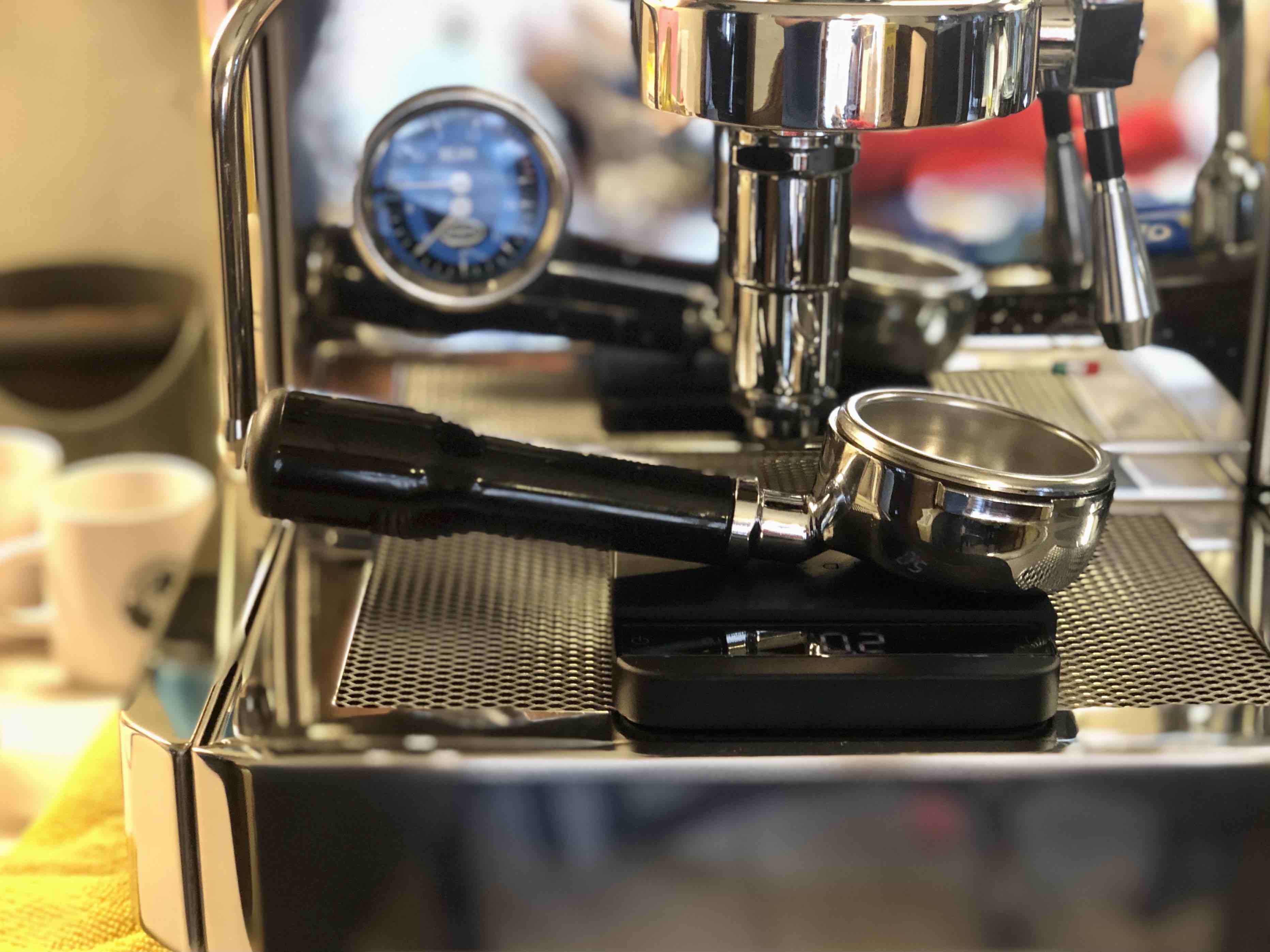 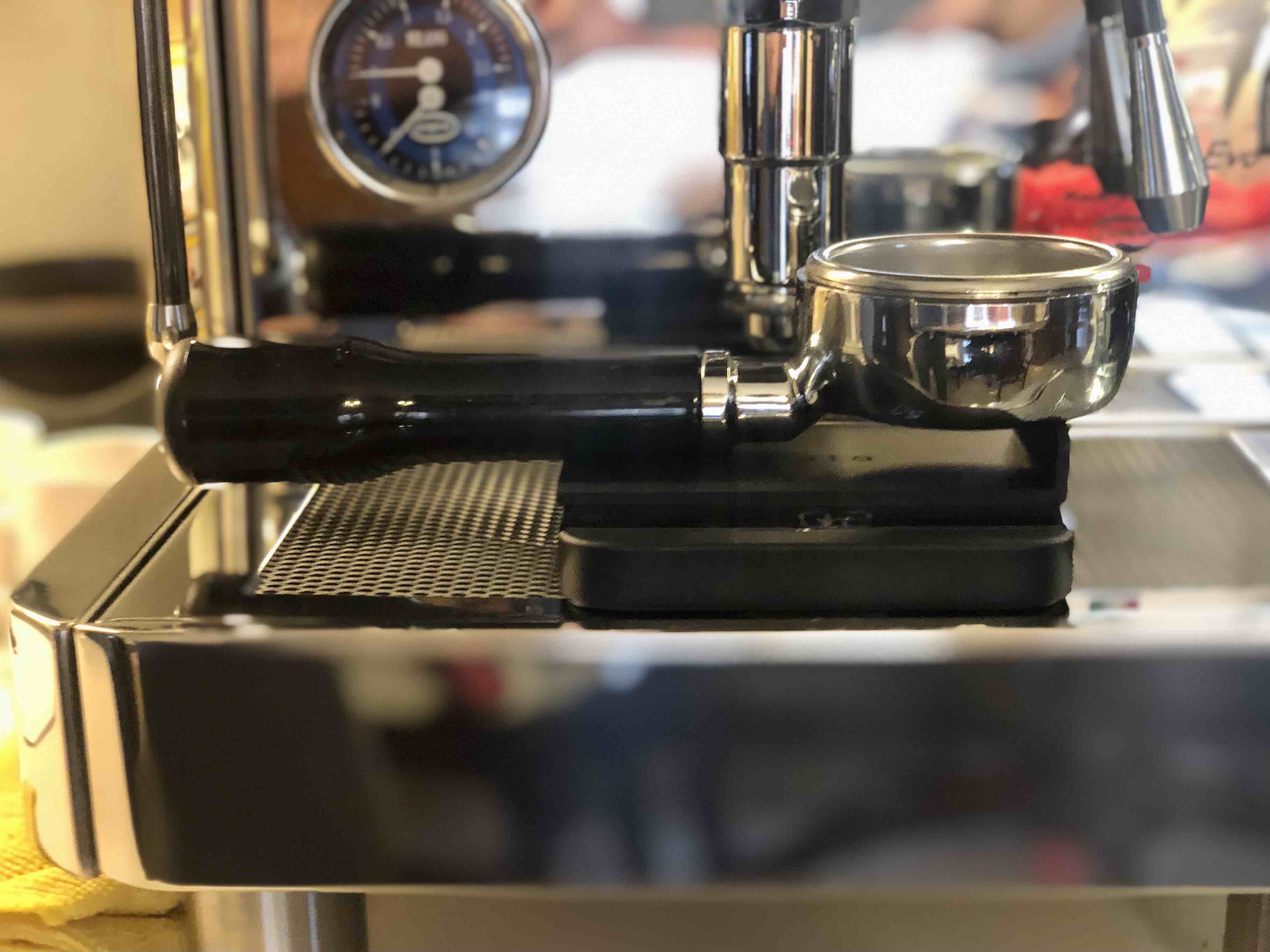 So far a great initial impression.  The scale I received was all black, if you think its just some cheap plastic scale it is quite the opposite as it is a nice piece of quality aluminum.  There are only two buttons on the glass display, but these two buttons give you all the simplicity and functionality you need.  To the left is the power button and to the right is the tare button. 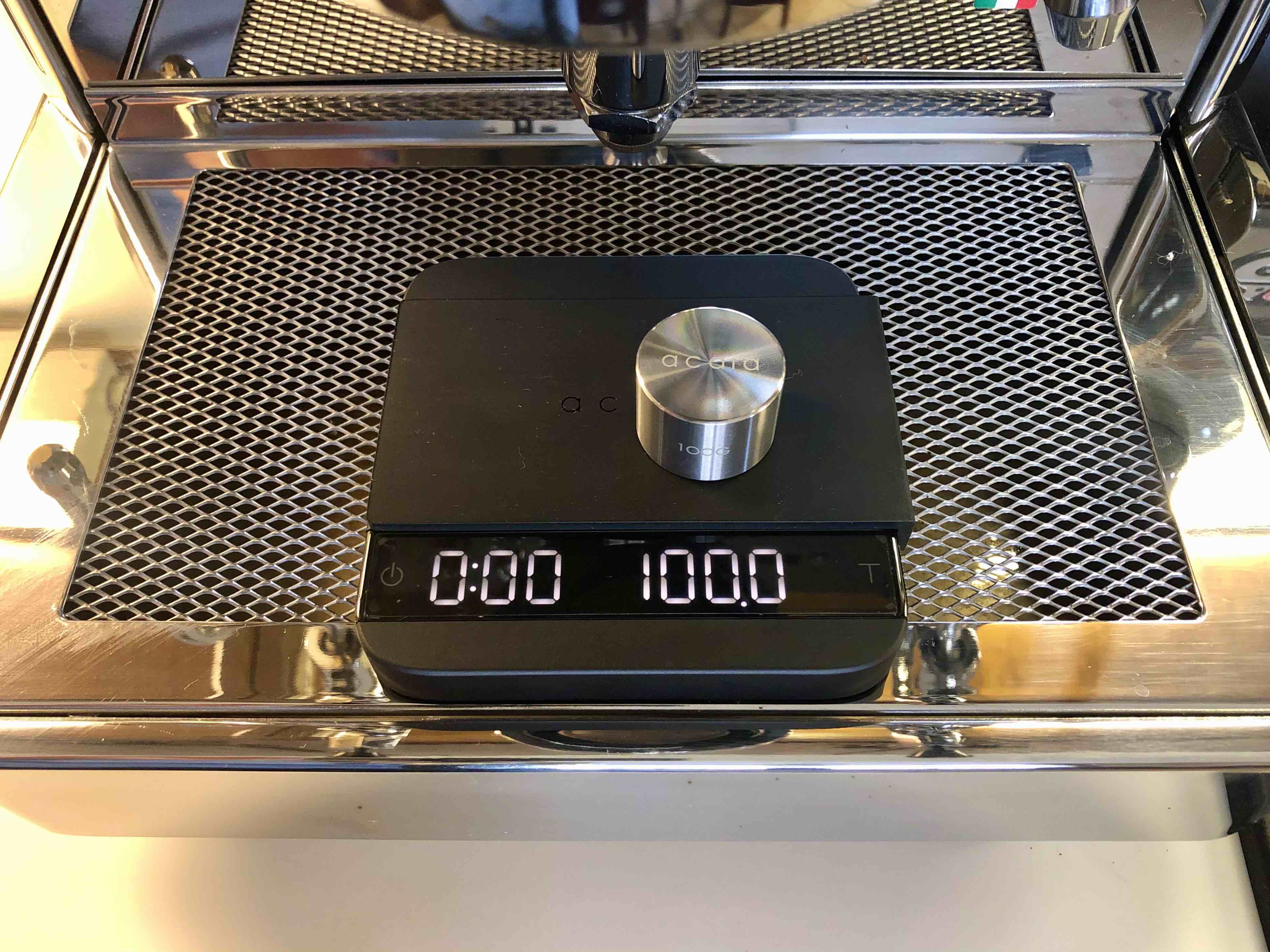 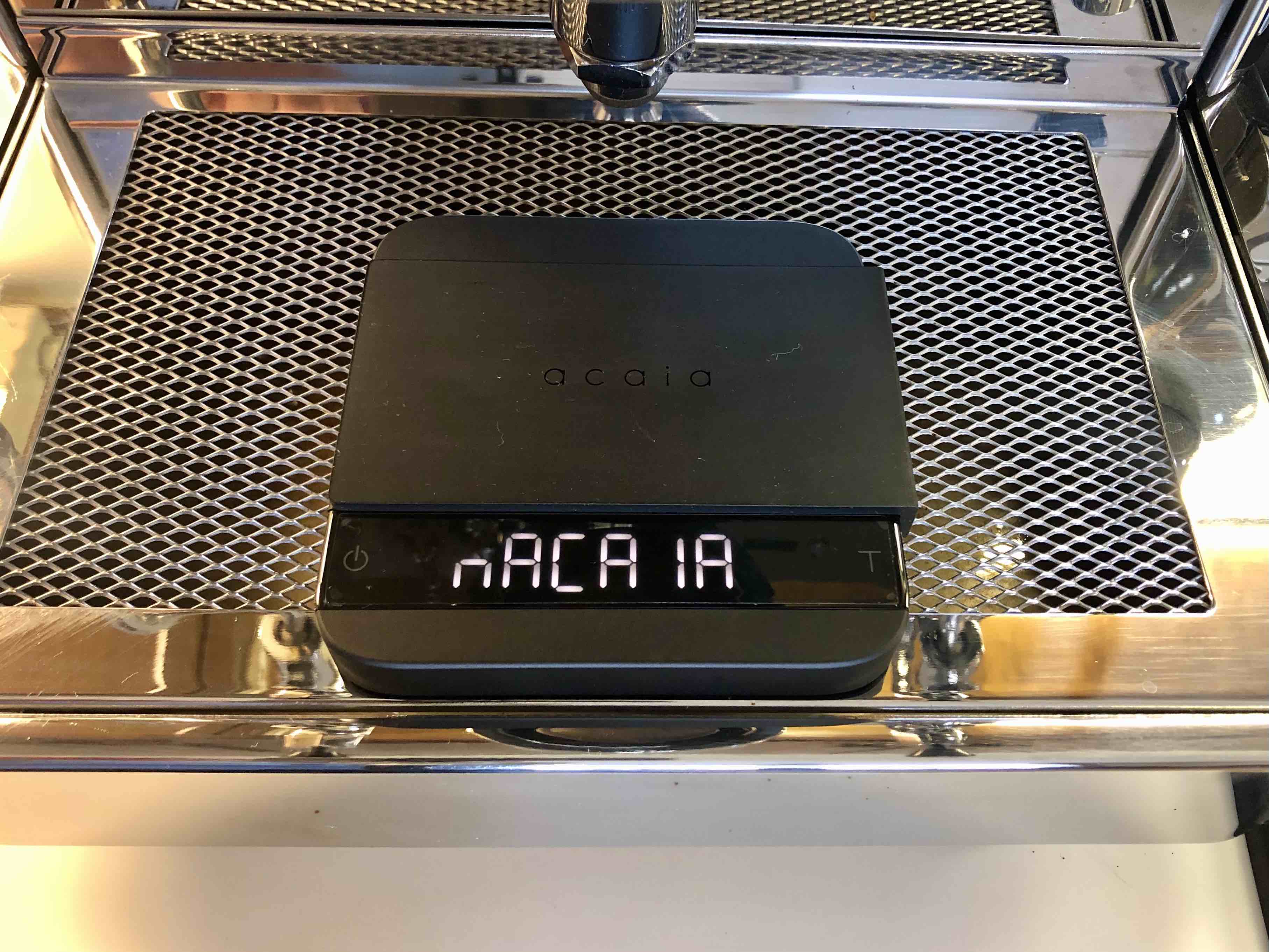 To change modes, click and hold the power button until the scale cycles through each of the modes.  More on that below.

The tare button is also multi function.  Its main function is to tare the scale.  If you aren't familiar with what that means, it zeros the scale.  Lets say you place a cup on the scale its going to weight the cup.  Hit the tare button and it sets it to zero again even with the weight of a cup resting on it. The default weight output is in grams, to change from grams to ounces long press the tare button to toggle between the two weight outputs.

Lets take a look at what makes this acacia scale really amazing.  They have 6 built in modes of operation, below I have detailed what each mode is capable of doing.  Towards the end I have also included an overview video going through each modes function in real life scenarios.

The default mode when turning the scale on for the first time is a simple scale.  It is set to grams and will tell you how many grams you are weighing.  Simple, right?  The scale displays as accurate as 1/10th of a gram on the built in display. 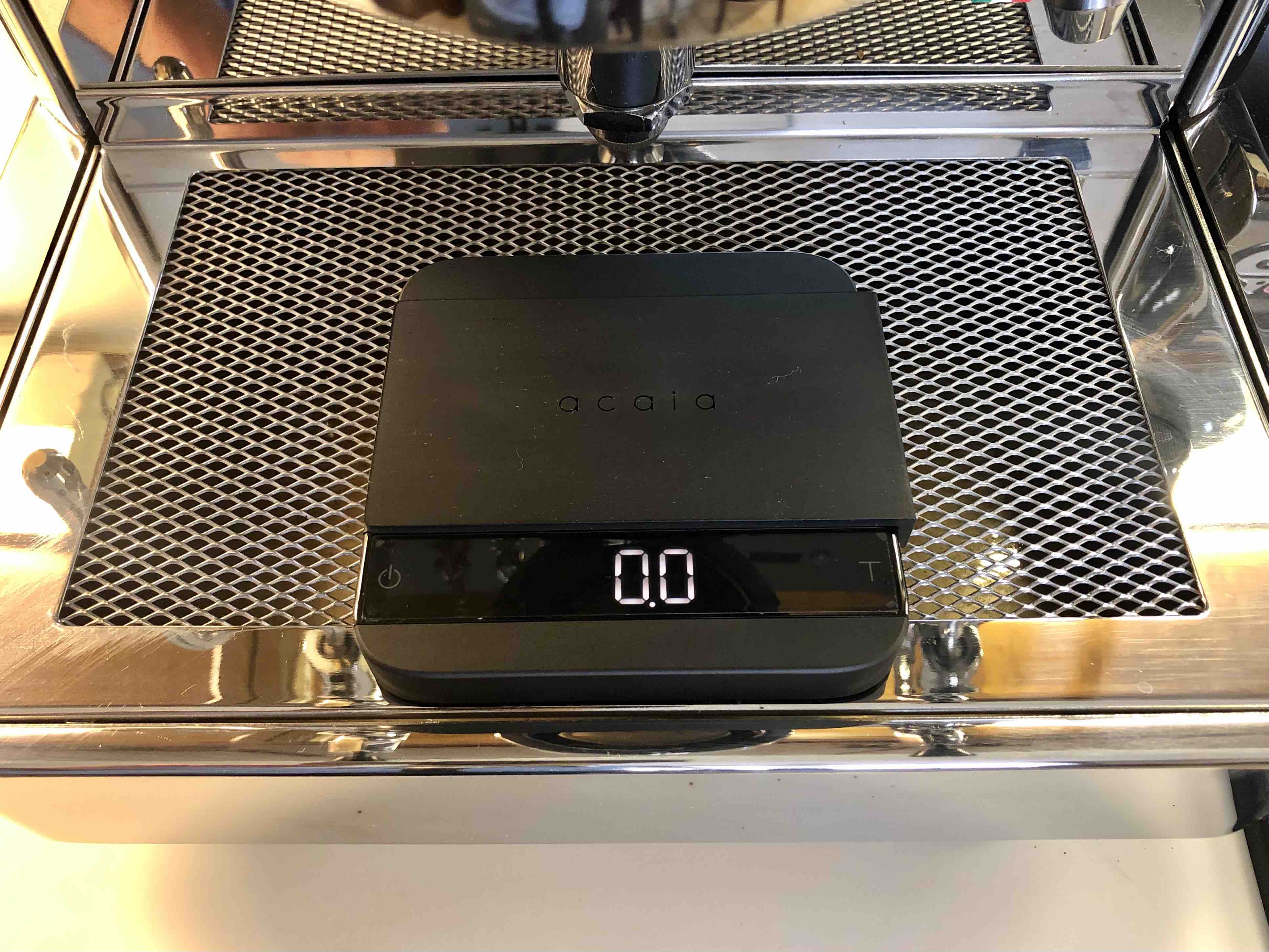 The second mode adds another layer of coolness.  The right side of the display shows you the weight in grams, and the left side is a timer.  For example if you are using to brew espresso you can tare your cup with the "T" button, and as soon as you start the espresso machine click the power button to manually start the timer.  An espressos brew and time ratio is typically 18g of beans yields 32g of espresso over approximately 30 seconds time. As you can tell, a scale with a timer really makes this brew ratio and time very achievable. 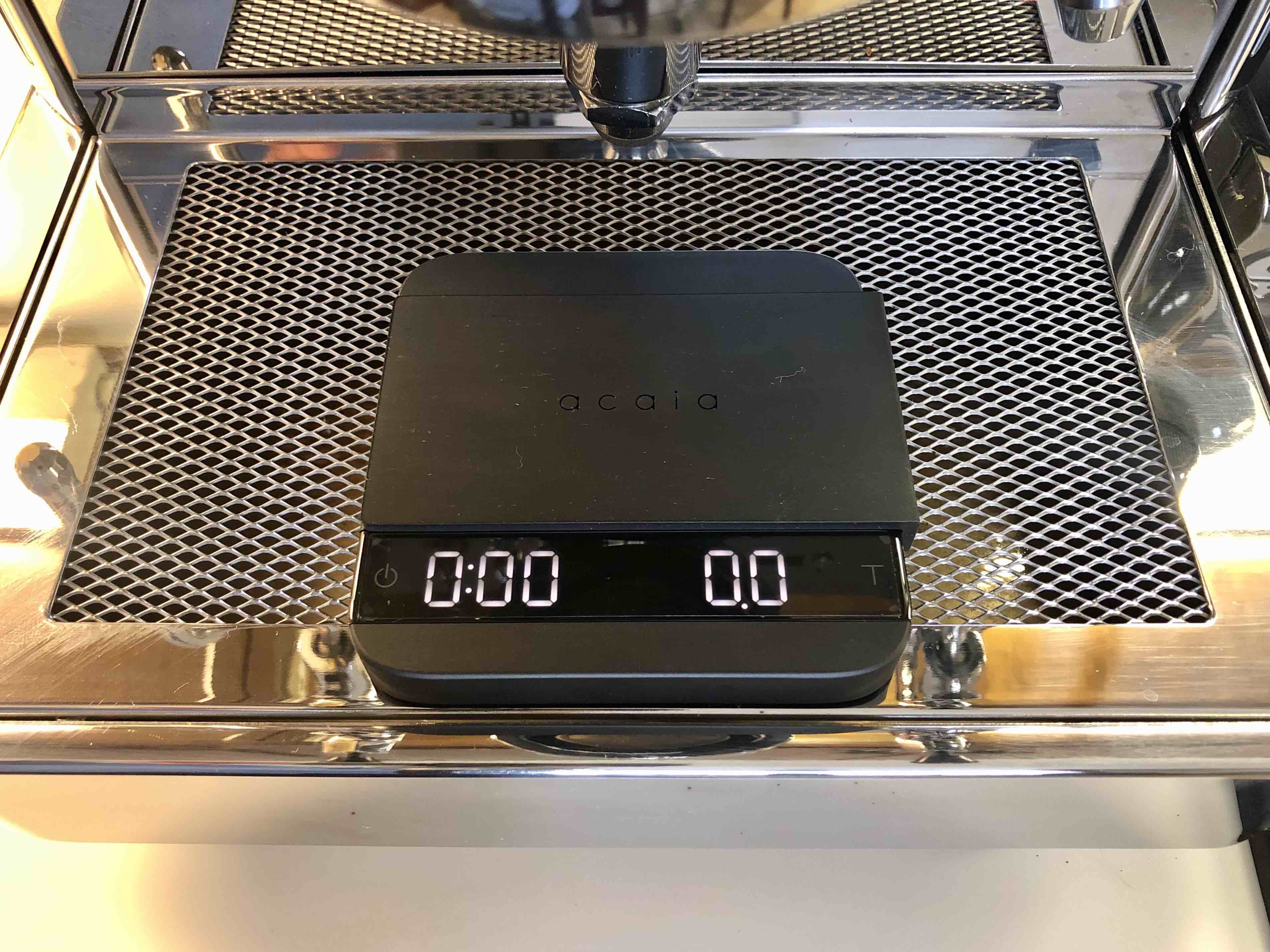 The third mode adds something really cool.  You will see a tiny water droplet icon to the right side of the display.  It has all the same measures as the second mode EXCEPT it starts the shot timer the second the first drop lands in your cup.   So this scale is weighing your shot and starts counting automatically.   Turn the espresso machine off, the last drop splashes into your cup, and the counter stops.  This feature alone got me so excited about this scale. 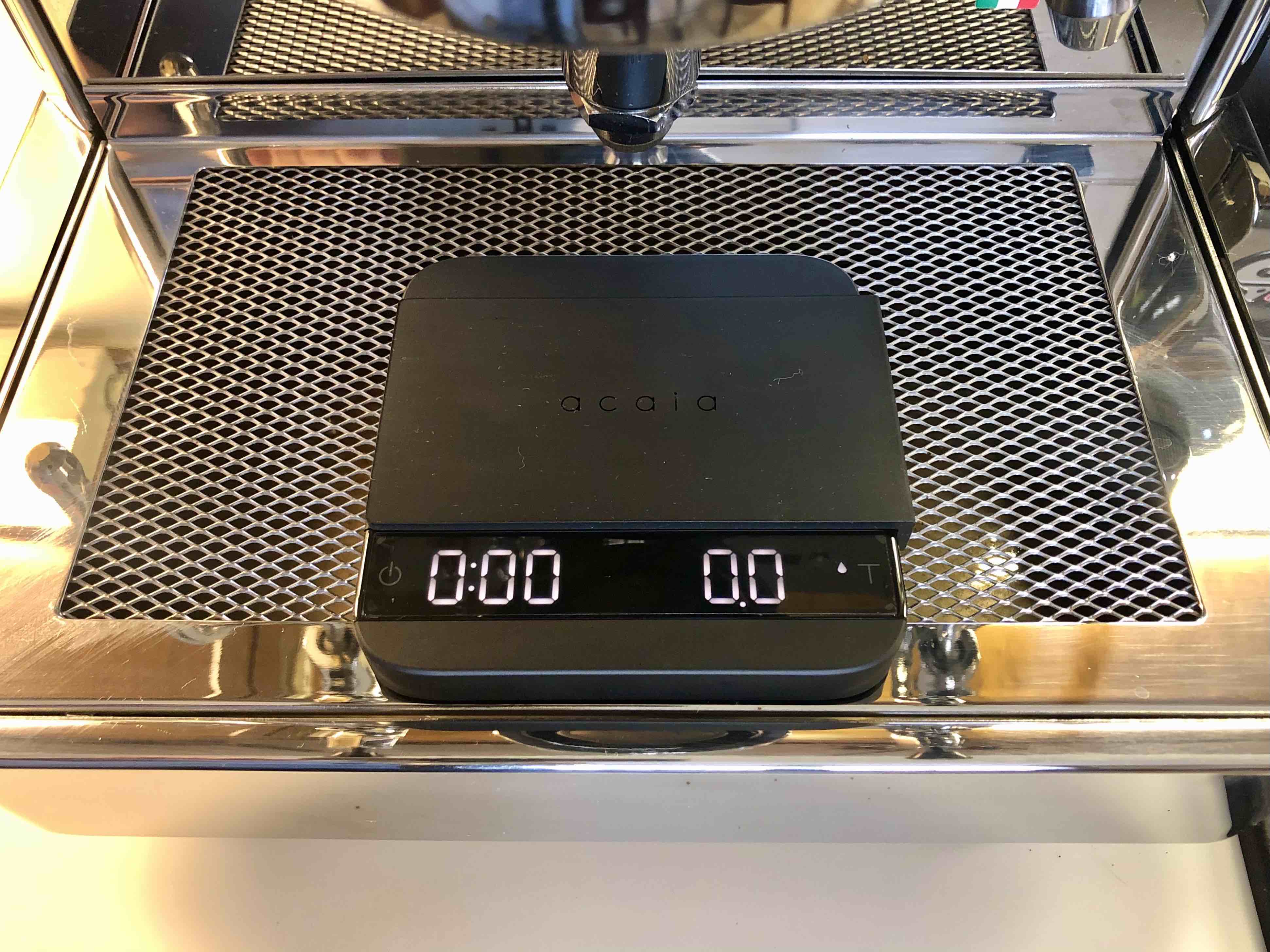 The scale looks for a steady weight, such as a cup to be placed on the scale.   Place it on the scale and after about 1 second it will automatically tare the scale.   Start brewing a shot, and the dynamic weight starts the shot timer as well as weighs the shot.  At the end of the shot, the timer stops automatically. 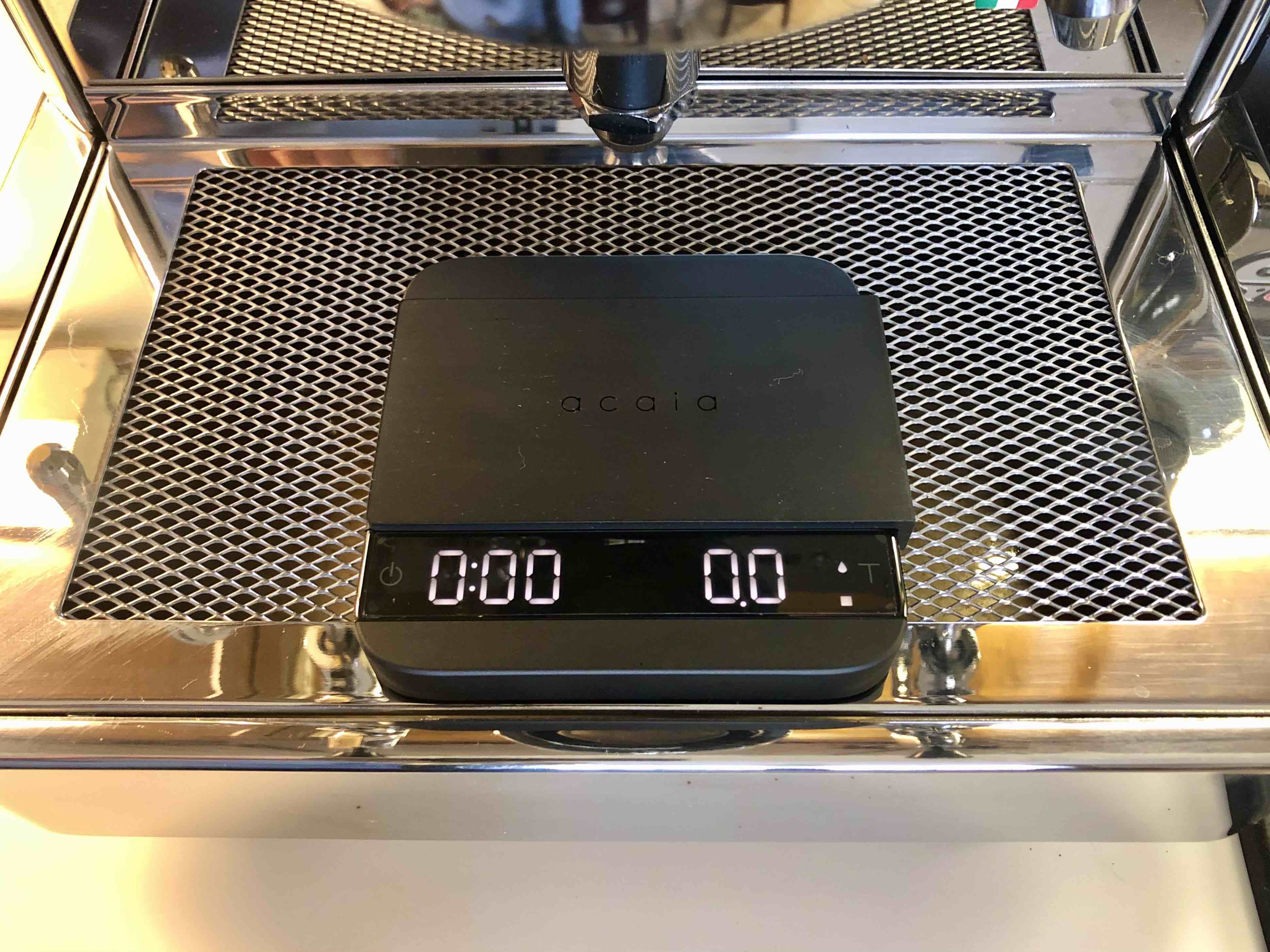 As mentioned above, when placing a steady weight such as a cup onto the scale, it will tare the scale and start the shot timer, even before the first drop.  This is nice for timing the entire shot time.  I can also see this being a huge perk for busy shops.  Hit the start button on your espresso machine and place a cup on the scale, and let the machine and scale do the rest. 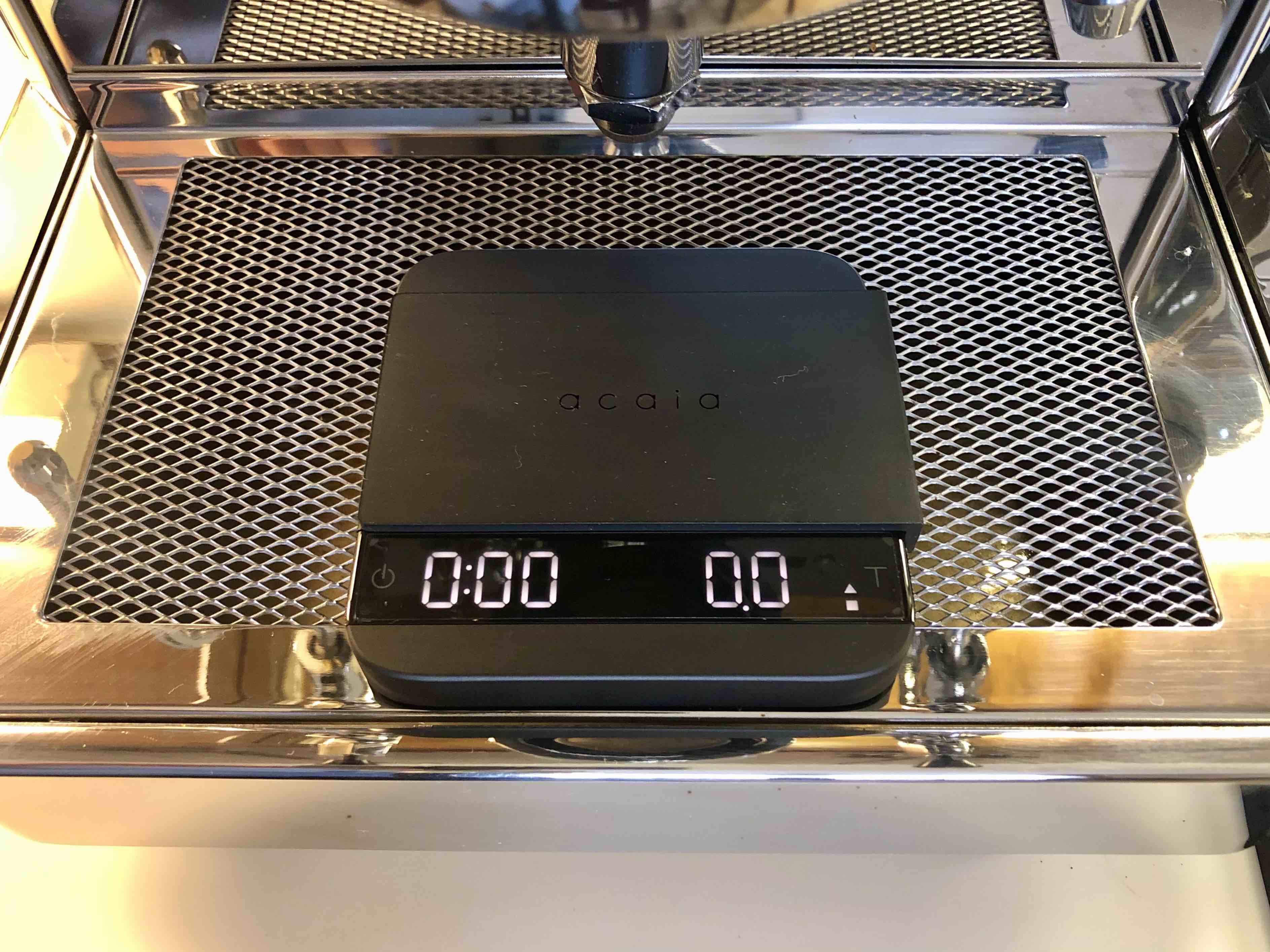 It does just as the description says.   If you are choosing not to time your shots, but would like to automatically tare the scale, it looks for a steady weight to be placed on the scale for approximately 1 second.  Any dynamic change in weight will display the weight without taring. 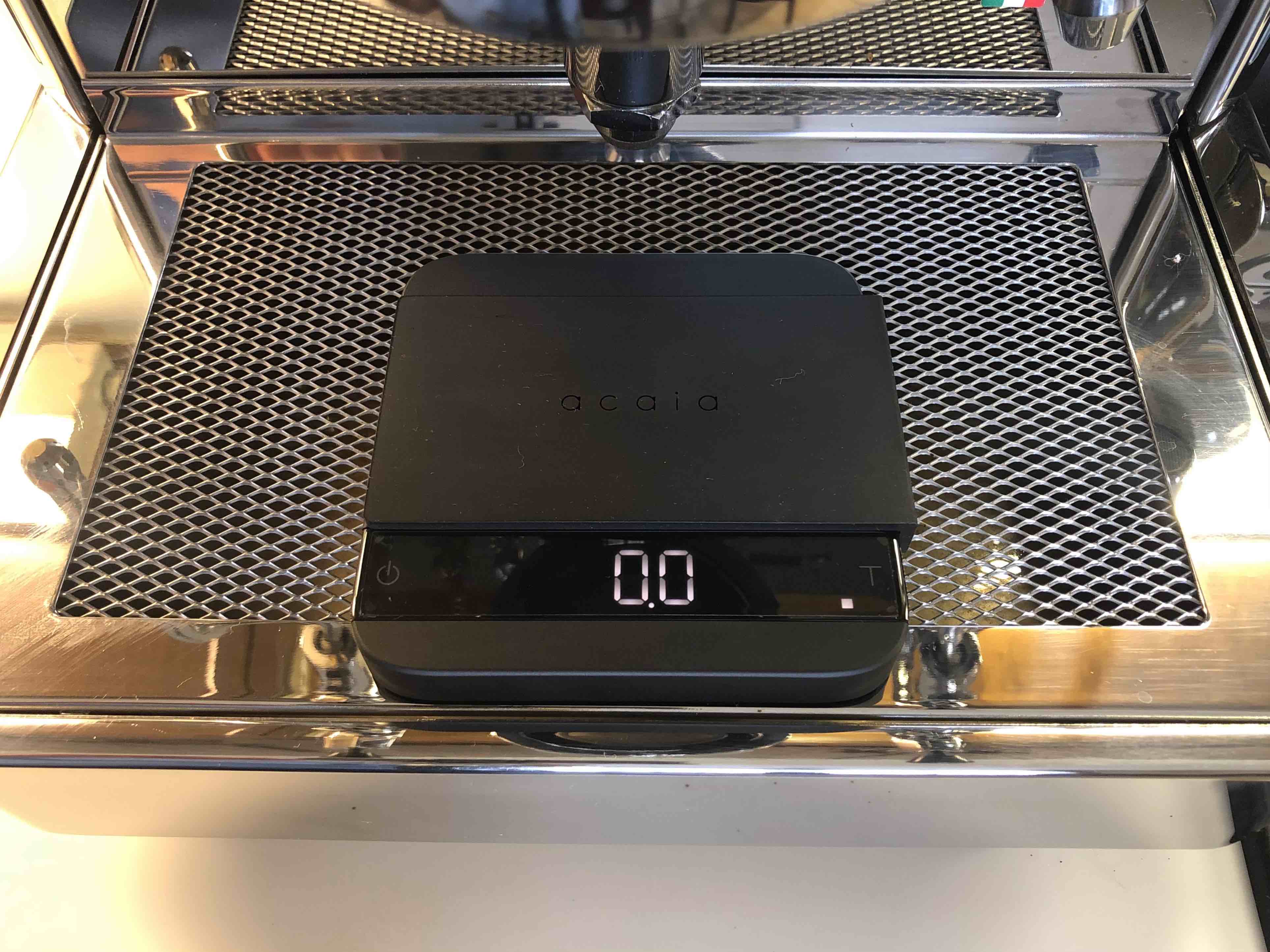 If you'd like to see the scale in action, here is an overview of the scales function and running through all the modes.

Acaia Overview from Barrett on Vimeo.

If you aren't excited about the Acaia scale yet, I will give it one more try.  The Acaia is a bluetooth scale.  I downloaded a couple of apps to my iPad and paired the scale up.  I had it paired within seconds.  The two apps I used were the suggested Acaia scale app and another one called Smart Espresso Profiler.  I was about to be excited yet again.  I prepared my typical shot, and tared the scale.  As soon as I started my shot, I hit the "start" button in the Smart Espresso Profiler app.  At that point it began to trend the shots weight vs time on a graph.  What is very nice about seeing it graphically is you can see long long your pre infusion time before first drop, as well as watch how quickly the show is brewed.  Using that data you can make adjustments to your grind and tamp if required.   If you have a machine with a pressure profile ability or even a flow control valve, you can adjust your machine accordingly.  I was using a Quick Mill Vetrano with a flow control valve and found it to be a lot of fun and helped me learn what the machine was doing.

Here is a screen shot of the Smart Espresso Profiler app.  It ran quite long because I was also videoing, more of a Lungo shot.   It shows the time, weight, and brew ratio.  If your machine has pressure profiling or flow control valve, the graph will show the trended weight to time. 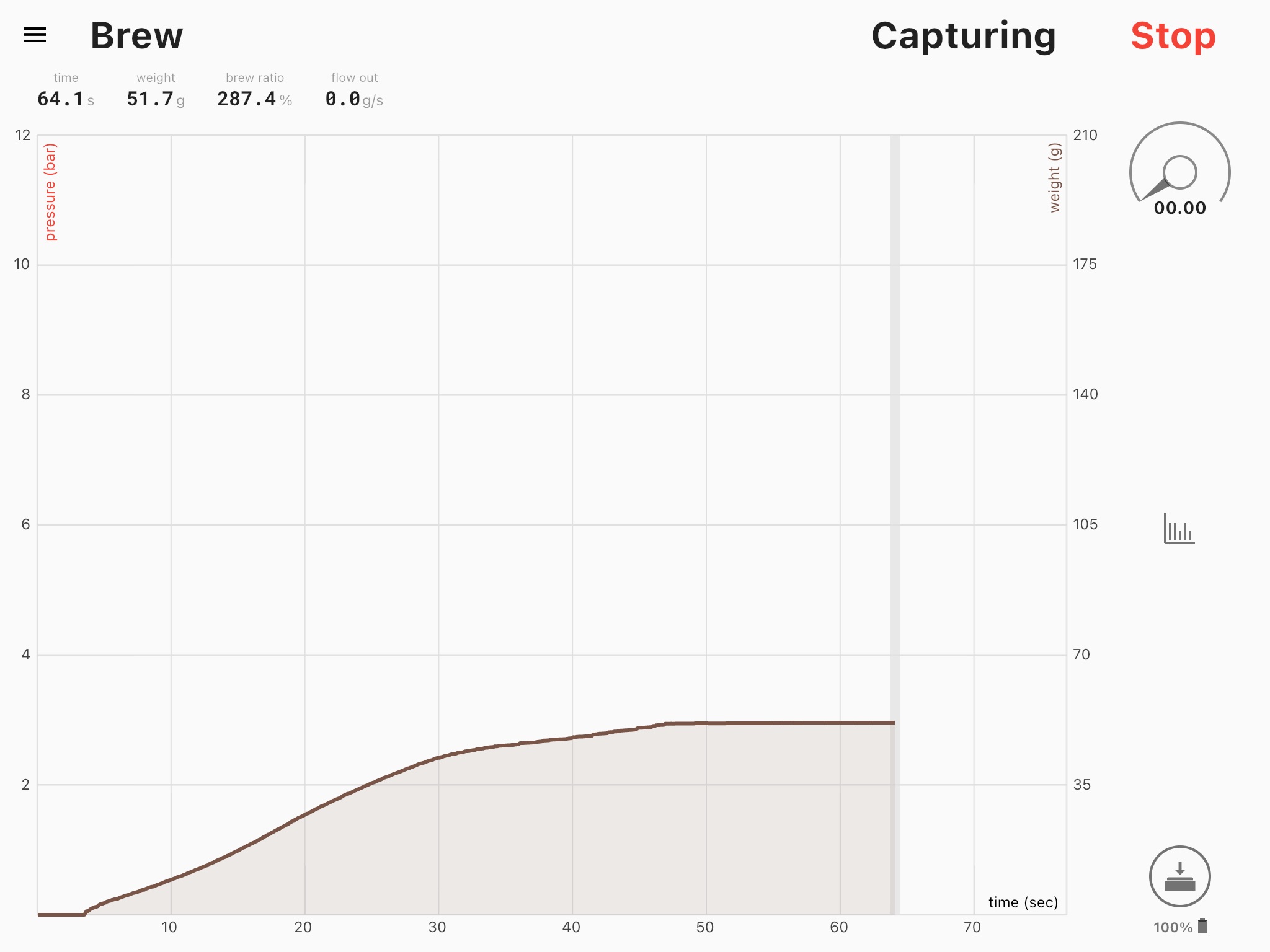 The Acaia app is horrible, I don't understand why they don't update it, but I guess they figure many people will use 3rd party apps instead. Still I find that to be very disappointing that they did not follow through with a better app.

If you have a fancier machine such as a Decent DE1 espresso machine, you can pair the scale up with your espresso machine and let the machine take control.  The DE1 does amazing things with pressure profiling, and the scale adds the next level giving the DE1 the feedback it needs confirming the profile and making adjustments.  How cool is that?

So, the 225 dollar question.  Is the Acaia Lunar worth it?  In my opinion 100% worth it.  The added feedback this scale give you to create repeatable shots, or adjust your shots is amazing.  The scale is very easy to use.  The stabilization time is very fast, less than 1 second for 1g and the response time is 0.2ms.  If you have an amazing espresso machine and amazing grinder, you might be short changing yourself on your espresso shots.   I focus on espresso but the scale can be used for pour over, or even preparing some cold brew.  It appears to be a high quality, built to last piece of equipment which also looks amazing atop your counter or on your espresso machines drip tray.  I wish I had purchased one a long time ago! 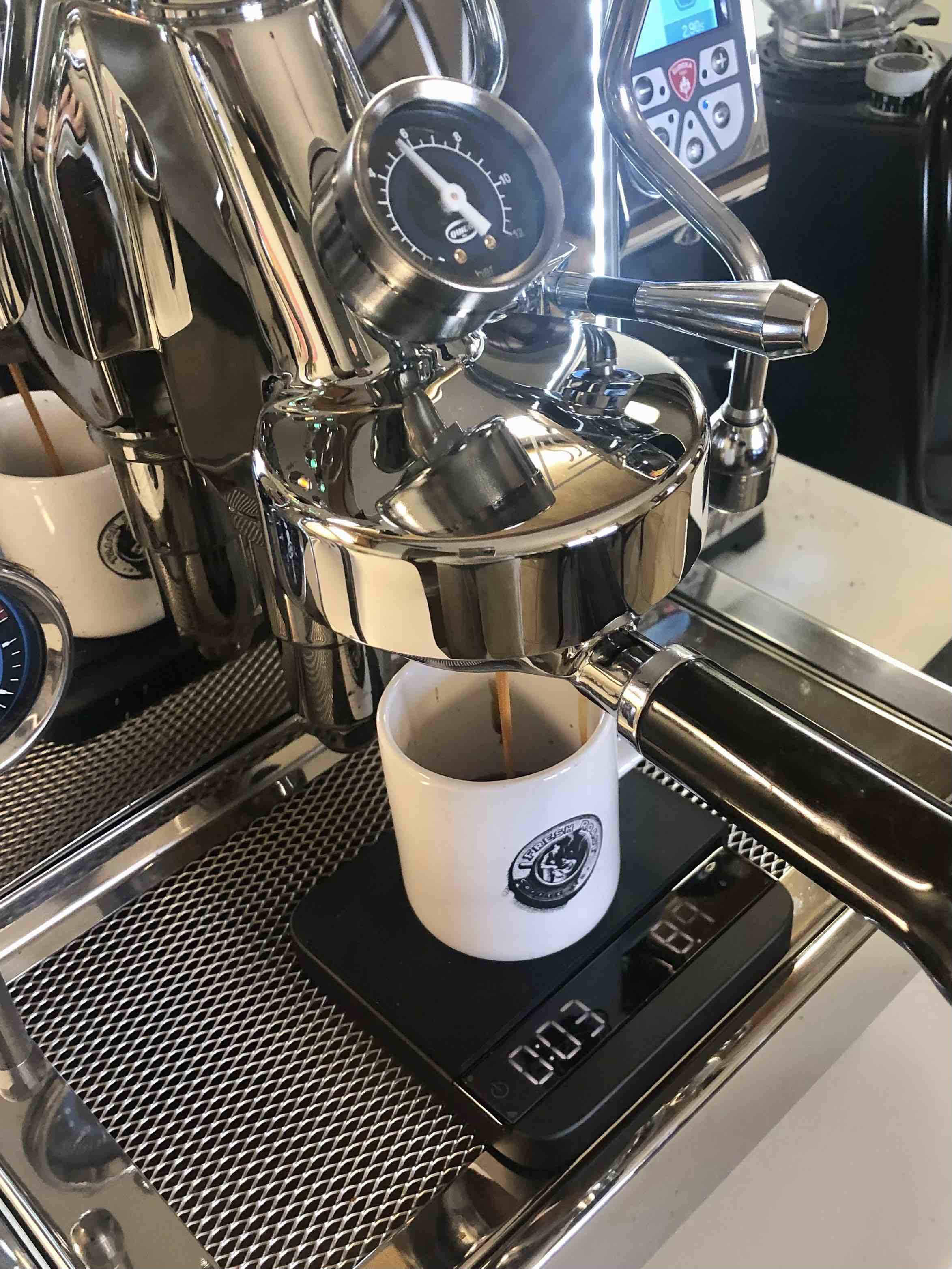 This Acaia Lunar scale came from Espresso Outlet and usually sells for about $225.