About the Bezzera Company

Bezzera has a history that goes all the way back to the invention of the espresso machine. In 1901 Luigi Bezzera patented the new method of making coffee under pressure – espresso. The first espresso machine was shown at the Milan International Fair in 1906. Since then the company has made a lot of advances in the world of espresso machines and is now run by the fourth generation of the Bezzera family.

Over 100 years later, Bezzera has about 70 employees, a modern manufacturing facility, and exports products to 50 countries around the world. Bezzera focuses producing superior quality machines for the prosumer home user and also produces commercial grade machines for a variety of coffee related businesses. At Espresso Outlet, we only sell their prosumer product line, but they do have good commercial grade machines as well.

Bezzera are manufactured in the company’s facilities, from start to finish, whether it’s making the boilers or machine side panels, the company does it all, which is part of the reason why Bezzera espresso machines are legendary when it comes to quality and fitness of finish. With over 100 years of experience in the business, one would expect no less than superb quality and that is what you get when you purchase a Bezzera.

Bezzera Product Line Up and Comparison

This is a great espresso machine for someone that does primarily plain espresso and wants to have temperature control to get the best shots possible. It can steam milk, but you will have to wait between brewing and steaming. It is a great single boiler espresso in it’s price range. It has a PID for temperature stability and control, nickel plated copper boiler, vibratory pump, and a large water tank that will reduce refill frequency. 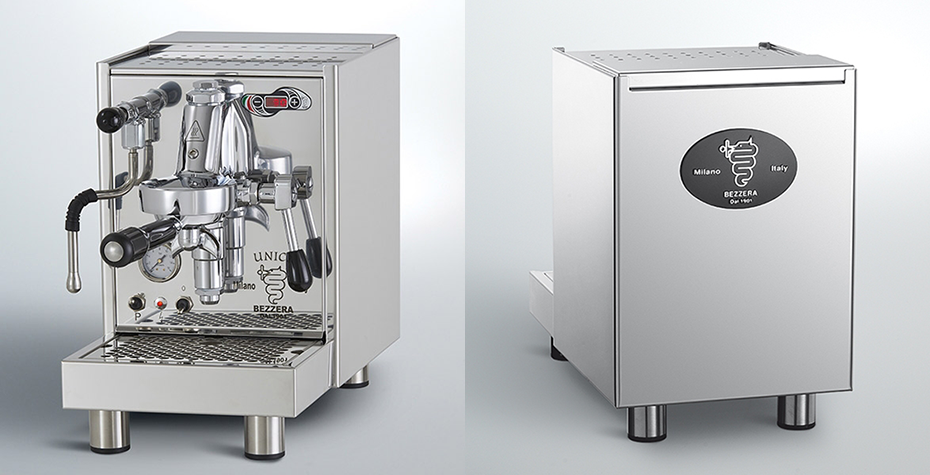 The BZ10 is a small, compact, semi automatic heat exchanger espresso machine that has a boiler pressure gauge for monitoring pressure in the boiler, but it also has a grouphead that is heated with two heating elements. A thermostat on the grouphead monitors the pressure and turns the heating elements on or off depending on whether the temperature is getting too hot or too cold. 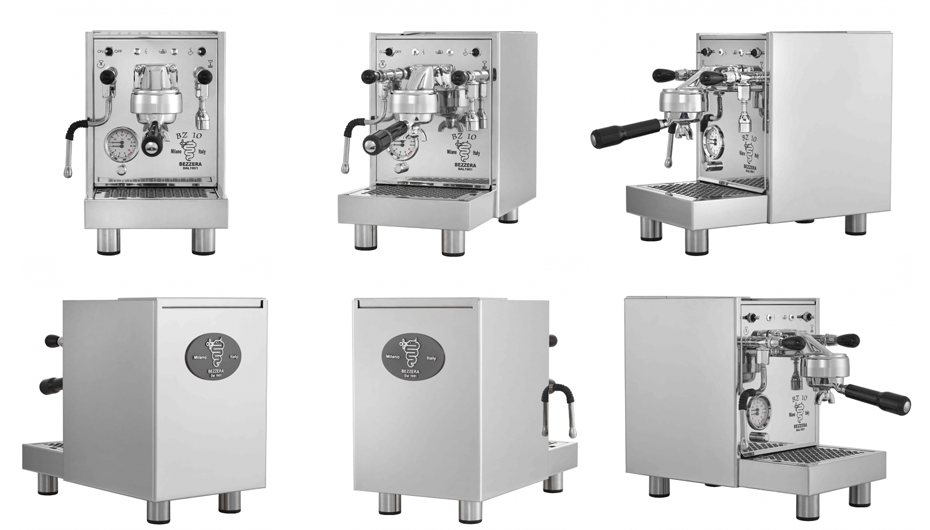 With the semi automatic version of the BZ16, the user manually start the brewing cycle and when the user thinks the shot is down, they have to manually stop the brewing cycle. Other than this, the machine has the same features as the volumetric version including, copper boiler, heat exchanger design, dual gauges, one for brewing and one for steaming, a hot water tap, and a steam wand for milk based drinks. The machine has the Bezzera heated grouphead. 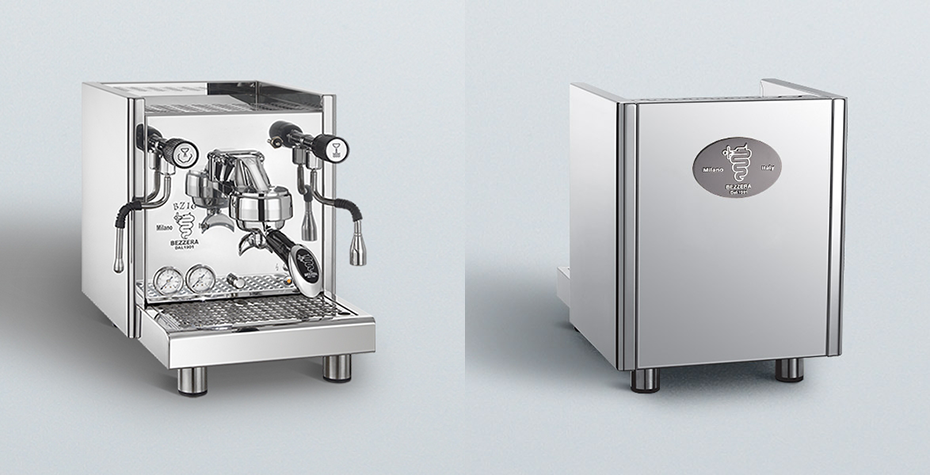 There are two variations of the BZ16, the semi-automatic and the volumetric (sometimes called electronic or fully automatic). With the volumetric version, you can push a button and the machine will brew the shot and automatically stop itself after a predefined amount of espresso has been dispensed. The BZ16 has a 2 liter copper boiler, heat exchanger brewing design that lets you brew and steam at the same time, brew pressure gauge and steam pressure gauge, and a wand for steaming and a hot water tap for brewing. The machine has the Bezzera heated grouphead. 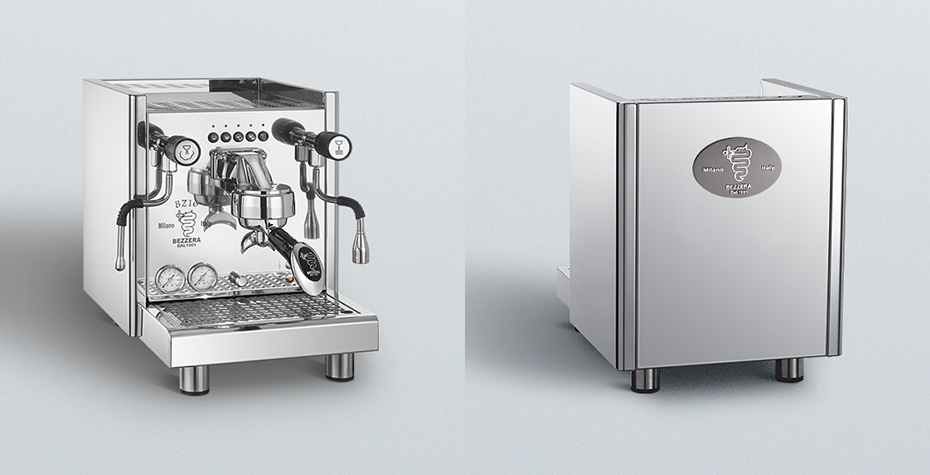 The Bezzera Magica espresso machines are similar to the Bezzera BZ16 with a lot of similar features, but rather than having the heated grouphead design, the Magicas have the traditional E61 grouphead design that is heated with a thermosyphon that pulls water from the boiler, through the grouphead and back to the boiler again. These machines have a lot of great features, including stainless steel bodies, heat exchanger design that allows you to brew and steam at the same time, brew pressure gauge, boiler pressure gauge, joystick controls for steam and hot water wands, huge 4 liter water tank, vibratory pump, and a 2 liter copper boiler.

This machine has the same features as the Magica with no PID, but of course has a PID. The PID will allow temperature adjustment and will keep the boiler temperature stable.

The Bezzera Mitica PID is a machine that is similar to the Magica model, with a lot of the same features, including a heat exchanger design, E61 grouphead, joystick controls, 2 liter copper boiler, steam wand, hot water wand, stainless steel body, and four liter water tank. The main difference is the Mitica is a direct connect capable machine that has a rotary vane pump, while the Magica is a tank only model with a vibratory pump. 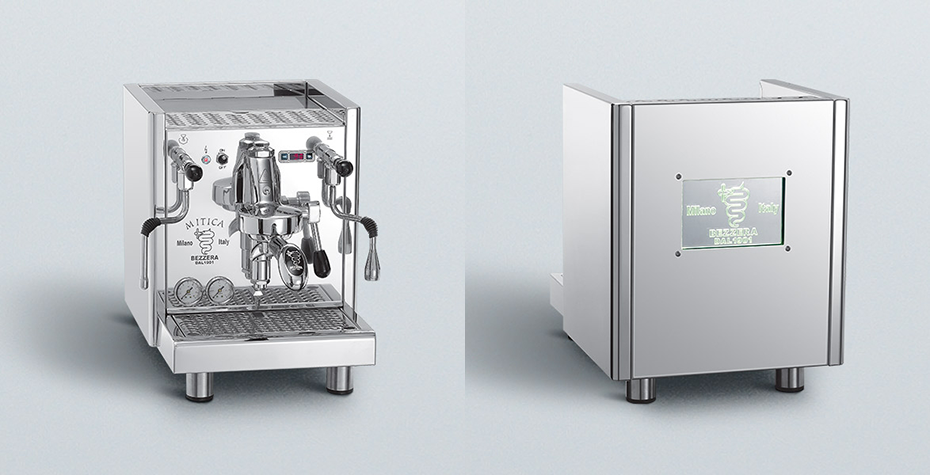 The Duo MN is a great double boiler machine that has a PID for the brew boiler and another PID for the steam boiler, giving you outstanding temperature stability and adjustment. Temperature is especially important for brewing as some coffee extract best at higher temperatures and others extract best at lower temperatures. Aside from this great feature, the Duo MN has a lot of other great features, including a touch screen display. The touch screen allows users to program pre-infusion, auto on/off features, priority of boiler heating, switch between direct connect and water tank, automatic backflushing, and more. The machine looks amazing and has wood accents that make it look even better. Other great features include, a very large water tank, joystick controls, e61 group head, .45 L brew boiler, 1 L steam boiler, cup warmer, automatic boiler refill, and rotary pump. 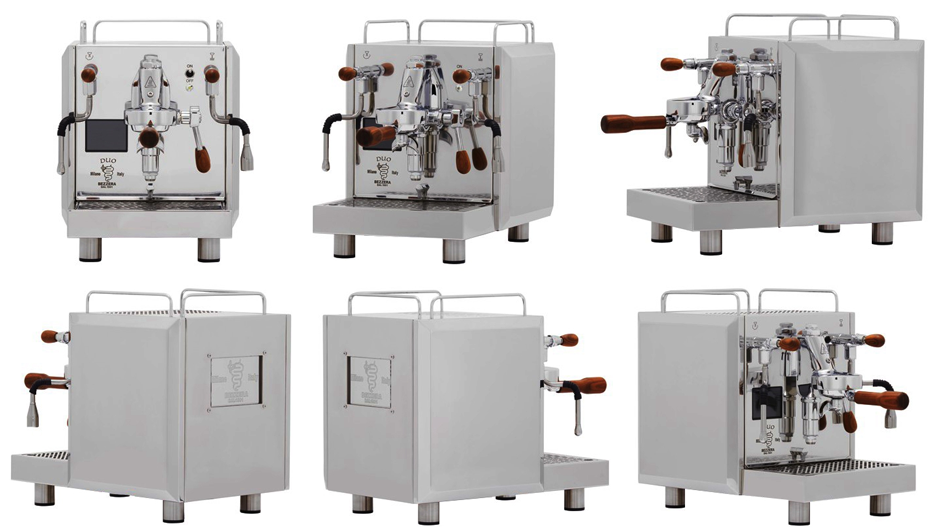 The Duo DE is the volumetric version of the Duo MN. It has four volumetric dosing buttons and a manual button, so if you want to use the machine as a semi-automatic, you can easily do that. Along with this great feature, the Duo DE has an additional great feature the Duo MN doesn’t have, and that is a THIRD PID that monitors the grouphead temperature. This is a great feature that very few machines have. 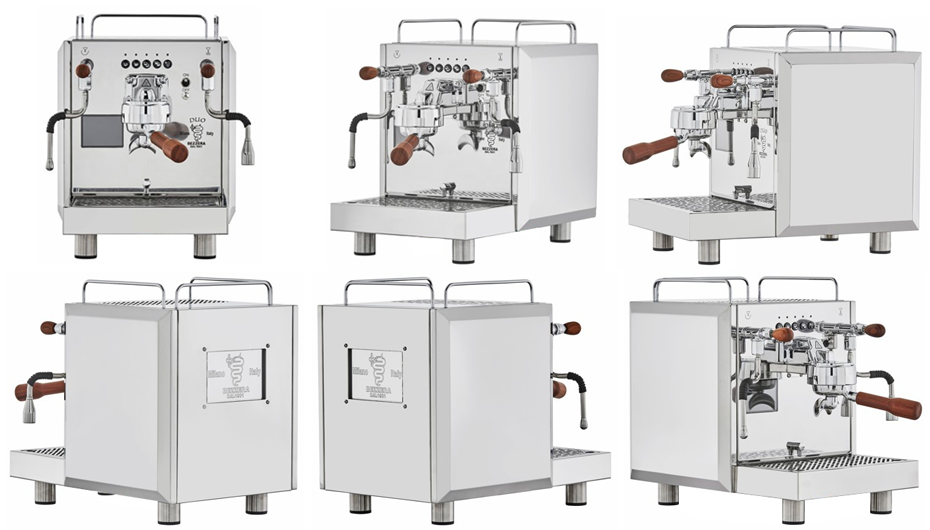 The Bezzera Matrix is a unique looking dual boiler machine. It has illuminated LED body panels that allow you to change the colors whenever you want to. The Matrix MN is the same as the Duo MN other than this feature and different cup rails. 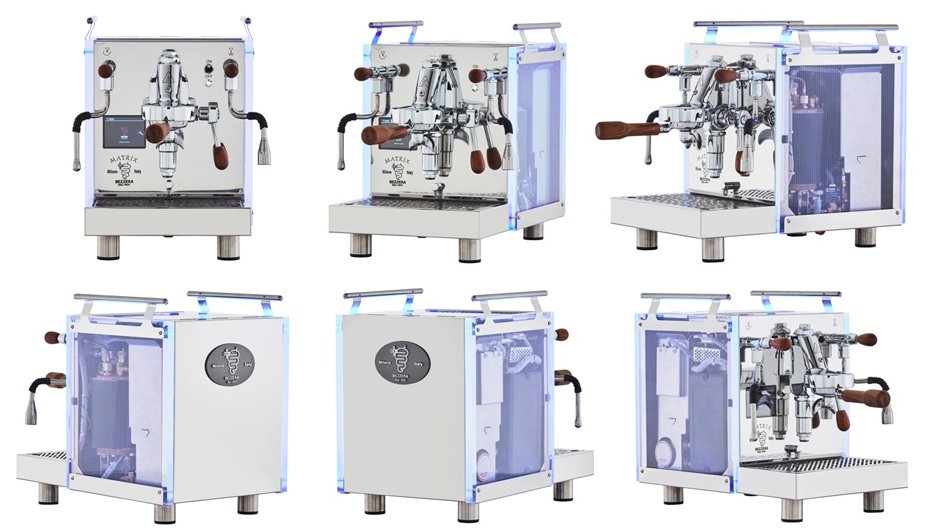 The Matrix DE is the same as the Matrix MN, except it has volumetric dosing and a third PID for the group head. 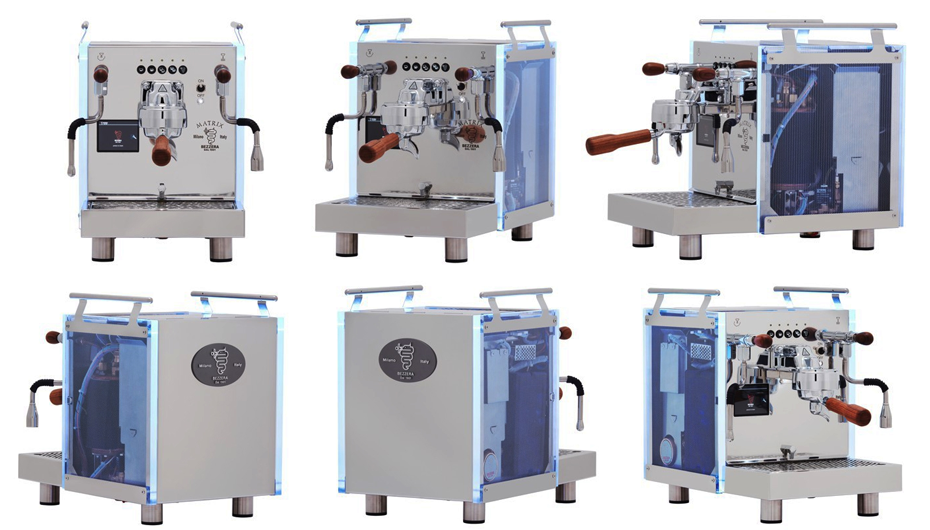 The Strega is a great spring lever espresso machine by Bezzera. Lever machines provide a bell shaped extraction pressure profile during extraction, which provides for a greater depth of flavor when compared to pump operated machines that extract at a set level of pressure during the entire extraction. The machine has a vibratory pump that refills the boiler and provides preinfusion pressure. Extraction pressure is applied by the spring, not the pump. It has an electronically heated grouphead, a pressurestat, a boiler pressure gauge, and joystick controls for the steam and hot water wands. 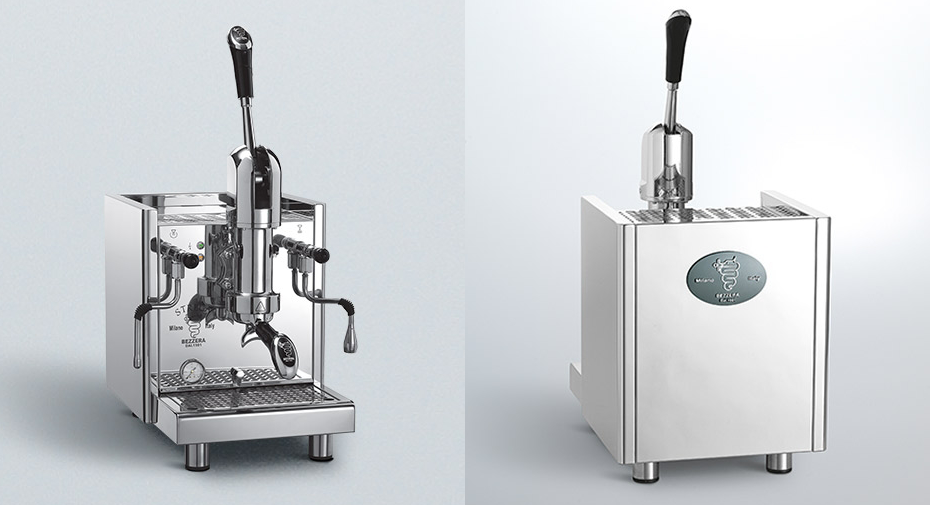 This version of the Strega is identical to the water tank version, but it is switchable between water tank and direct connect. So you don’t like the idea of refiling the water tank on a continual basis, this machine will allow you to connect it directly to a cold water line and you’ll never have to refill a water tank again!